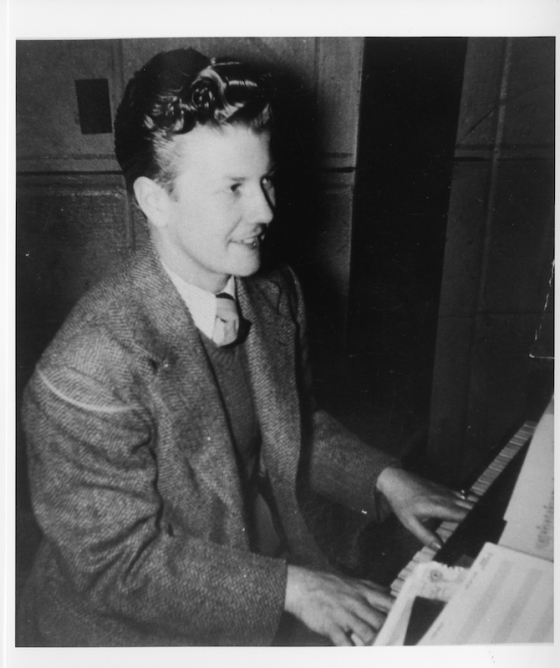 Parabola Films announced today that award-winning co-directors Aisling Chin-Yee (The Rest of Us) and Chase Joynt’s (Framing Agnes) feature length documentary No Ordinary Man will screen as part of the 45th edition of the Toronto International Film Festival (TIFF). One of the 50 feature films selected for this year's TIFF, the film is an in-depth look at the life of musician and trans culture icon Billy Tipton. The film will be released by F3M in Canada in early 2021. For more information on screening dates and times please visit tiff.net.

Written by Amos Mac (co-founder of trans magazine Original Plumbing) and Aisling Chin-Yee, No Ordinary Man documents the life of American Jazz musician Billy Tipton whose story, for decades since his death, was framed as an ambitious woman passing as a man in pursuit of a music career. In No Ordinary Man, Tipton’s story is re-imagined and performed by trans artists as they collectively paint a portrait of an unlikely hero. Together, the filmmakers join Tipton’s son Billy Jr. to reckon with a complicated and contested legacy: how do you tell the story of someone who was hiding in plain sight yet desperate to be seen? No Ordinary Man features leading voices in the trans community, including Marquise Vilsón, Scott Turner Schofield, Susan Stryker, C.Riley Snorton, and Thomas Page McBee, among others.

“This has been an extraordinary collaboration, not only between us as directors, but with the many visionary trans culture-makers featured in the film. Bringing Billy Tipton’s story to audiences at TIFF is incredibly rewarding,” said Chin-Yee and Joynt. “Jazz was Billy’s life passion, but his legacy goes far beyond music. To generations of trans people, Tipton’s life serves as an indispensable example of a vibrant and fulfilling trans life across history.”

About the film team

Aisling Chin-Yee is a cisgender, award-winning producer, writer, and director based in Montreal, Canada. Aisling was named one of Canada’s Rising Film Stars by Now Magazine 2019. Her feature film directorial debut, The Rest of Us, starring Heather Graham (Boogie Nights, The Hangover), and Sophie Nélisse (The Book Thief) premiered at the Toronto International Film Festival 2019. Aisling also produced the award winning feature films, Rhymes for Young Ghouls, Last Woman Standing , and The Saver among others. In 2017, she co-founded the #AfterMeToo movement alongside Mia Kirshner and Freya Ravensbergen. In 2018 she was selected in the inaugural cohort of professionals in the 50 Women Can Change the World in Media and Entertainment in Hollywood. In 2019, Aisling received the TIFF Canning Fellowship.

Chase Joynt is a transgender moving-image artist and writer whose films have won jury and audience awards internationally. His latest short film, Framing Agnes, premiered at the 2019 Tribeca Film Festival, won the Audience Award at Outfest in Los Angeles, and is being developed into a feature film with support from Telefilm Canada’s Talent to Watch program. Awarded the EP Canada/Canada Film Capital Award for Emerging Canadian Artist, Joynt’s first book You Only Live Twice (co-authored with Mike Hoolboom) was a 2017 Lambda Literary Award Finalist and named one of the best books of the year by The Globe and Mail and CBC.

Amos Mac is an out transgender writer staffed on the upcoming drama series Gossip Girl (HBO Max, 2021). Previously he's worked on shows including Amazon’s Transparent and VICELAND’s Gaycation. From 2009-2019, Amos was a founding editor of Original Plumbing; the first print magazine in America dedicated to trans male culture. Informational and humorous, OP provided ten years of artful documentation of trans masculine community. The official book, Original Plumbing: The Best of Ten Years of Trans Male Culture, was released in 2019 by the Feminist Press. Amos Mac is repped by Raquelle David at Elevate Entertainment.

Co-founder of Parabola Films, President of the Board of Montreal's RIDM - Rencontres internationales du documentaire de Montréal, and former President and long-standing board member of the Documentary Organization of Quebec, Sarah Spring has been actively involved in Montreal's vibrant film community for the past fifteen years. Her company, Parabola Films, is a boutique production house that champions emerging filmmakers and under-represented voices. Sarah has also been working within the interactive arts sector through collaborations with MUTEK and La Société de développement des entreprises culturelles (SODEC). Sarah sits on the Montreal Arts Council’s Cinema Committee, co-Chairs the Canada Film & Video Fund, and consults for artists and the institutions that finance them.