The Sold-Out Staged Concert From The West End Live in Cinemas Thursday, December 12 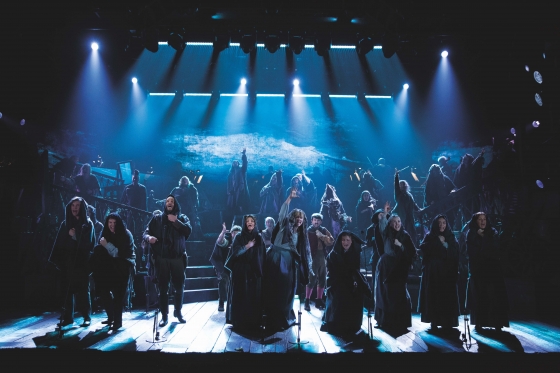 Toronto, ON, (TSX: CGX), November 22, 2019 - Cineplex Events and Trafalgar Releasing today announced that for one-night-only on Thursday, December 12, Les Misérables – The Staged Concert will be captured live and broadcast to Cineplex theatres across Canada. Cameron Mackintosh’s spectacular sell-out staged concert version of Boublil & Schönberg's legendary musical will be captured live from the Gielgud Theatre in London.

Seen by over 120 million people worldwide, Les Misérables is undisputedly one of the world's most popular musicals – and now Les Misérables – The Staged Concert is the must-see event for all fans of musical theatre and live event cinema.

Leading an outstanding cast and orchestra of over 65 are Michael Ball (Javert), Alfie Boe (Jean Valjean), Carrie Hope Fletcher (Fantine) and Matt Lucas (Thénardier), who perform the songs I Dreamed A Dream, Bring Him Home, One Day More, On My Own and many more. This sensational one night only cinematic live event is not to be missed.

"The extraordinary sell-out success and response to our spectacular new theatrical concert staging of Les Misérables has been phenomenal so we are thrilled to add one final extra performance on December 12 which will be captured live and broadcasted to cinema audiences around North America,” said Cameron Mackintosh “Starring our entirely brilliant London cast headed by Michael Ball, Alfie Boe, Carrie Hope Fletcher and Matt Lucas, our 16 week limited season at the Gielgud sold out in a few days but now you can storm the barricades to ensure you catch this thrilling live performance direct from the West End in a cinema near you. For the masses of disappointed fans who couldn't get to see this amazing concert in London this live event will be a unique shared experience of thrilling drama, glorious music and sensational singing performed by an amazing all-star cast and orchestra of over 65 - the like of which you will have never seen before. If you have ever Dreamed a Dream - this is it!"

About Les Misérables
Les Misérables originally opened in London at the Barbican Theatre on 8 October 1985, transferred to the Palace Theatre on 4 December 1985 and moved the Queen's Theatre on 3 April 2004. When Les Misérables celebrated its 21st London birthday on 8 October 2006, it became the World's Longest Running Musical, surpassing the record previously held by Cats in London's West End. In October 2014 the West End production broke another record by celebrating its historic 12,000th performance. In celebration of its 25th anniversary Les Misérables made theatrical history with an international first - three different productions playing in London simultaneously - the Original Production at the Queen's Theatre on Shaftesbury Avenue, the acclaimed New 25th Anniversary Production at the Barbican (where the show originally premiered in 1985) and the celebratory concert at The O2. Next month Les Misérables will return to it West End home at the recently re-named Sondheim Theatre, previously the Queen's.

Seen by over 120 million people worldwide in 52 countries and in 22 languages, Les Misérables is undisputedly one of the world's most popular musicals ever written, with new productions continually opening around the globe, with seven more currently scheduled. There have been 47 cast recordings of Les Misérables, including the multi-platinum London cast recording, the Grammy Award-winning Broadway cast and complete symphonic albums, the live recording of the New 25th Anniversary

Production and now the motion picture soundtrack. The DVDs of the 10th Anniversary Royal Albert Hall Gala Concert and the 25th Anniversary at the O2 Arena have sold millions of copies worldwide.

There have been over 4,300 productions of the Les Misérables School Edition performed in the UK, US and Australia, making it the most successful musical ever produced in schools.

The 2012 Universal film version of Les Misérables co-produced by Cameron Mackintosh and Working Title Films, and directed by Tom Hooper has grossed $450 million worldwide to date. It is one of the highest grossing musical films of all time which has received the Golden Globe Award for Best Picture (Musical/Comedy) and eight Academy Award nominations, including Best Picture, and won three Academy Awards. The film's soundtrack debuted at #1 on Billboard's Album chart, topped the iTunes charts and has sold over 1.5 million copies worldwide.

The new touring production of Les Misérables opened to rave reviews across the UK and Ireland. Tickets are on sale until the end of 2020, including Southampton, Cardiff, Norwich, Bristol, Salford, Glasgow, Birmingham, Leeds, Dublin,  Canterbury, Hull and Zurich.

Headquartered in London, the company also has offices in New York, Los Angeles and Denver. More information about Trafalgar Releasing can be found at www.Trafalgar-Releasing.com.