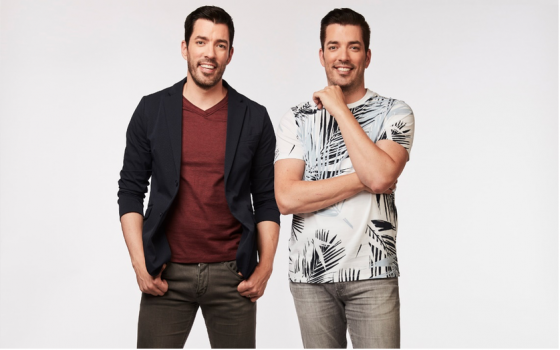 “Jonathan and I are grateful for our incredibly engaged kid fanbase and have wanted to do something more for this audience since launching our series of kids’ books, Builder Brothers,” said Drew Scott.

“We grew up on a ranch where we were encouraged to dream big, work together, keep trying and always learn from failure. These are the values we hope will resonate with this young audience,” said Jonathan Scott.

Builder Brothers’ Dream Factory centers around 10-year-old twins, Drew and Jonathan. A pair of regular kids whose extraordinary imagination, creativity, grit and heart – coupled with a big dose of “twin-spiration” – help solve problems in their neighborhood by dreaming big…..really big…sometimes too big! Along with their dog Moose and best friends Mel, Cee-Cee and Aiden, the Builder Brothers navigate the highs and lows of trying to make the world a better place - one big dream at a time.

Though it’s a character-driven comedy series at heart, the series doesn’t shy away from real kids’ issues and what they go through in navigating life’s ups and downs. It encourages kids to share their ideas, dream big, and not to be disheartened. That element of resilience and problem-solving is what sets the show apart.

“It’s fantastic to be working with Scott Brothers Entertainment, who have such a similar ethos, who are not afraid to take risks and although we both make very different content, we still share a lot of the same values,” said Blair Powers, Executive Producer and Founding Partner of Sinking Ship Entertainment.

About Sinking Ship Entertainment Inc.
Sinking Ship Entertainment is an award-winning production, distribution and interactive company specializing in family and kids’ live action and CGI blended content. Since opening its doors in 2004, Sinking Ship has produced over 500 hours of content, and through their globally recognized in-house distribution division, has sold to over 200 countries internationally. In 2019 they set their sights on growth and launched a new animation series division. The company has rapidly earned a global reputation for high quality, ground-breaking original series and companion interactive experiences. Overall, Sinking Ship has won 17 Daytime Emmy® Awards and a variety of other international awards including Canadian Screen Awards, Youth Media Alliance Awards, Fan Chile Awards, Parents Choice Awards, the Shaw Rocket Prize, and the Prix Jeunesse International. In addition to production, Sinking Ship operates a cutting edge VFX and Interactive Studio, creating multi-platform digital experiences and interactive content for audiences around the world. The Toronto-based company is home to over 175 shipmates. www.sinkingship.ca.

About Scott Brothers Entertainment.
Scott Brothers Entertainment (SBE) is a multifaceted production company that strives to develop cutting-edge entertainment by combining years of experience in film, television, and digital media. Winner of the Most Innovative Producer of the Year Award at the 2019 Banff World Media Festival, SBE is the brainchild of co-founders Drew and Jonathan Scott and has evolved from start-up to competitive content creator with a laser-sharp focus on innovation, expansion, and working with like-minded partners. For more information, visit www.sbentertainment.com.

About Drew and Jonathan Scott
Entrepreneurs, authors and twin television personalities, Drew and Jonathan Scott are co-founders of Scott Brothers Global, which includes Scott Brothers Entertainment, the home furnishing company Scott Living, and the design-inspiration e-commerce platform, Casaza. Best known as the hosts of multiple top-rated HGTV series including the Emmy-nominated and Canadian Screen Awards-winning Property Brothers and Brother vs. Brother, among others, Drew and Jonathan’s shows are enjoyed by millions of viewers in over 160 countries. Dream Home, It Takes Two: Our Story, and their children’s lit series Builder Brothers are all New York Times and Wall Street Journal bestsellers. In 2017, the brothers were named Habitat Humanitarians, the highest recognition offered by Habitat for Humanity. Most recently, they launched a top-rated mobile game, Property Brothers Home Design, and a quarterly lifestyle magazine, Reveal, published by Meredith Corporation. For more information, please visit thescottbrothers.com or follow @MrSilverScott and @MrDrewScott.