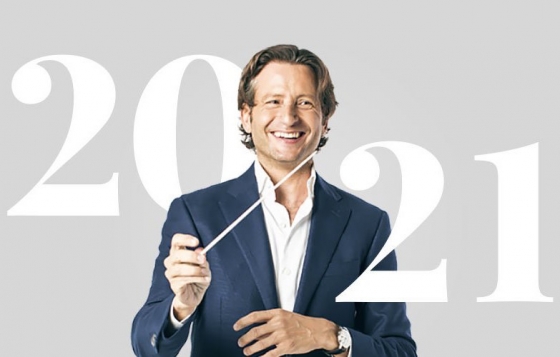 Toronto, Ontario—February 5, 2020. Incoming Music Director Gustavo Gimeno has set the tone for his first five years with the Toronto Symphony Orchestra (TSO) by launching a 2020/21 season that personifies his expansive artistic vision, intellectual curiosity and sense of adventure. Gustavo is driven by a passion for exploring how well-known works in the classical repertoire contrast and illuminate repertoire across various genres and styles. His season offers works of orchestral adventure that will appeal to Toronto audiences known to embrace a broad range of musical and artistic experiences. The TSO is entering its 99th season, and Gustavo Gimeno is the first new Music Director in 15 years.

“In my time visiting Toronto, I was very inspired by the cultural sophistication of the city. There is an international sensibility in Torontonians that is hungry to delve deeper into the music and experience different musical styles and artists. I am tremendously excited to get to know Toronto better and to embark on our musical exploration together,” said Maestro Gimeno.

“Gustavo has programmed a season that will inspire our dedicated patrons who already have a passion for orchestral music, and ignite an interest in those who are new to it. The TSO is enjoying an artistic and organizational evolution, and Gustavo’s first season helps articulate the TSO’s desire to serve our city and our art form with a new Music Director who brings an electric presence to the podium and a palpable synergy with the musicians in our orchestra,” said Matthew Loden, CEO of the Toronto Symphony Orchestra.

Gustavo’s season kicks off September 23 with a program that is an exemplar of his curatorial approach. Mahler’s monumental Symphony No. 1 launches a multi-year cycle of the composer’s symphonies. Mahler will be performed alongside selections from Mozart’s La clemenza di Tito with Canadian mezzo-soprano Emily D’Angelo, who recently received rave reviews for her performance in the Canadian Opera Company’s Barber of Seville. The program will also feature Crimson for Large Orchestra by Montreal-born conductor and composer Samy Moussa, whom Gustavo has appointed as the TSO’s inaugural Artist in Residence. Through this new role, audiences are invited to explore the breadth of an individual artist’s repertoire, and to go deeper into their unique musical language. Five of Moussa’s works will be performed by the Orchestra throughout the season, one of which will be conducted by the composer himself on a Masterworks program.

Gustavo has invited superstar cellist Yo-Yo Ma to be part of his first season to help him celebrate his arrival at the TSO. The multi-GRAMMYⓇ Award winning cellist returns to the TSO in June 2021 for the first time in six years to perform Elgar’s Cello Concerto, conducted by Gustavo. The concert is a Special Performance, and subscribers will have priority access to purchase tickets for the event, which is anticipated to sell out.

No. 5 and No. 9, Brucker’s Symphony No. 4 “Romantic”, which is the beginning of a mult-year Bruckner cycle, and Elgar’s Variation on an Original Theme “Enigma”.

The most ambitious mark of Gustavo’s inaugural season will be an opera-in-concert—Verdi’s ever-popular Rigoletto, semi-staged by Joel Ivany, Artistic Director of Against the Grain Theatre (February). Baritone and regular Metropolitan Opera performer Quinn Kelsey will headline a stellar cast with soprano Sofia Fomina. Joining the Orchestra and 10-member vocal cast will be the men of the Toronto Mendelssohn Choir, a long-time TSO partner.

The celebration of Beethoven@250 will continue throughout the season with the complete incidental music to Goethe’s play Egmont, Symphony No. 2, and contemporary works inspired by Beethoven from Unsuk Chin (October) and Barbara Croall (November), all conducted by Gustavo. The season also includes Piano Concerto No. 3 (November) and Scottish Folks Songs performed by soprano Karina Gauvin as part of the TSO Chamber Soloists (October).

Highlighting the exceptional talent of the TSO musicians, ConcertmasterJonathan Crow will lead an all J.S. Bach program (March), including two Brandenburg concertos, showcasing the TSO’s oboe, violin, flute, and trumpet players. He also curates The TSO Chamber Soloists, who will perform before six Masterworks concerts.

Gustavo conducts 12 Masterworks programs in the season including an all-Spanish tribute to his birthplace featuring six works ranging from the evocative language of Francisco Coll to Ravel’s Rapsodie espagnole to the ever-popular guitar concerto Concierto de Aranjuez by Rodrigo (January).

Special new initiatives designed by Gustavo include Lunchtime open rehearsals, post-concert chats at each of his performances, and a late-night performance of Stravinsky’s The Rite of Spring. A champion of music in education, Gustavo will offer high school students an exciting and engaging experience when he conducts a week of School Concerts.

Gustavo’s commitment to the evolution of new Canadian repertoire is seen throughout the season, which will feature five World Premières commissioned by the TSO from RBC Affiliate Composer Emilie LeBel (January), Adam Scime, Bekah Simms, Roydon Tse (November), and Samy Moussa (May).

Gustavo is proud to build on the TSO’s history of providing a fertile ground for emerging artists. He has launched a NextGen Composers initiative, which will give three emerging Toronto composers an opportunity to be mentored by RBC Affiliate Composer Emilie LeBel. Gustavo has invited Adam Scime, Bekah Simms and Roydon Tse to explore the theme of Remembrance Day in each of their five-minute symphonic pieces which will be performed by the Orchestra in November. This signature initiative will begin an ongoing relationship between the composers and the TSO.

The long-standing touring exchanges with the National Arts Centre Orchestra in Ottawa and Orchestre symphonique de Montréal will continue with the TSO visiting the two cities and with both orchestras featured in Toronto for our 2020/21 season.

The Pops Series, under the direction of Steven Reineke, will launch on the heels of the Toronto International Film Festival with a program honouring the best Oscar-recognized songs and scores in September. Five more concerts will feature favourites from the ’80s, ABBA, jazz, and Broadway as well as the annual TSO Holiday Pops concert with Canadian Broadway star Ryan Silverman. Gustavo is pleased to announce that Mr. Reineke, who has held the role of Principal Pops Conductor since 2012/13, has agreed to extend his role through the 2022/23 season.

Our Special Performances will include popular movie screenings with orchestra (Home Alone in Concert, Tim Burton’s The Nightmare Before Christmas—In Concert, and Star Wars: The Last Jedi—In Concert) and our annual performance of Handel’s Messiah with the Toronto Mendelssohn Choir.

As a result of the overwhelmingly positive audience feedback we received last year for Relaxed Performances, Gustavo has expanded the initiative. These concerts are accessible to neurodiverse audiences, including patrons on the autism spectrum, those with sensory and communication disorders, people with learning disabilities or those who simply want a more relaxed concert experience. For the first time, a relaxed program designed for adults will also be offered.

The Toronto Symphony Orchestra’s commitment to engaging and partnering with GTA communities and beyond will be strengthened by the appointment of a newly created Principal Education Conductor & Community Ambassador. Acclaimed Canadian conductor Daniel Bartholomew-Poyser, who enlivens the orchestra experience for audiences everywhere, brings a highly energetic and dynamic approach to introducing community-based audiences outside the concert hall to the art form. He has accepted Gustavo’s invitation to lead the TSO’s expansion into the community. He will also conduct two Young People’s Concerts in the season and two Relaxed Performances.

“Gustavo and I are both thrilled to be working with Daniel to strengthen our shared commitment to this vital priority of the TSO. From engaging children in schools and seniors in long-term care facilities, to partnering in health and wellness initiatives in underserved communities, Daniel will foster broad and meaningful connections to music,” said Matthew Loden, CEO of the Toronto Symphony Orchestra. “I am proud of our work with current community partners such as Concerts in Care, Leadership by Design, and Rexdale Community Health Care Centre, and I know that Daniel’s galvanizing energy, enthusiasm and thoughtful connections through music will have a lasting impact throughout the GTA.”

“On behalf of the musicians of the Orchestra, I am delighted to share our excitement about our 2020/21 season. From the moment we first met Gustavo, there was a palpable energy and alignment -- a real feeling of collaboration. He brings an electricity to the podium, and this season’s program gives us so much to sink our teeth into; it is challenging and beautiful, with artistic depth,” says TSO Concertmaster Jonathan Crow.

The TSO Season Presenting Sponsor is BMO Financial Group.
The NextGen Composer program is supported by the RBC Foundation.

Curated Series packages are on sale now for renewing and new subscribers at savings of up to 40% off single-ticket prices. Early-bird pricing is available through March 6, 2020.

2020/21 season subscribers will receive pre-sale priority for Yo-Yo Ma’s performance with the TSO. Super Subscribers—patrons who subscribe to the 2020/21 season and make at least a $100 charitable donation—will be at the very front of the line. Subscribers enjoy a variety of perks, including waived exchange fees and service charges, add-on discounts of 20% for additional performances throughout the season, and vouchers for complimentary coat check.