All New Family Zone Touches Down at FAN EXPO Canada 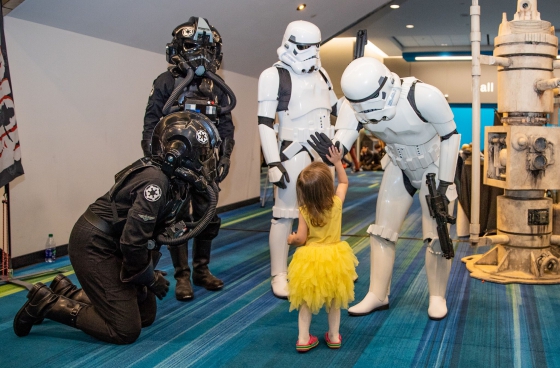 TORONTO, ON (July 30, 2019) – New this year, FAN EXPO Canada is bringing a world of discovery and adventure to fans of all ages with a 10,000 sq. ft. Family Zone; complete with dance parties, robots, LEGO, crafts and more! Young fans and fans who are young at heart can cap off summer by having a blast at the Metro Toronto Convention Centre from August 22-25, 2019 – a week earlier than in years passed.

Fresh off its debut at Toronto Comicon, the Family Zone is touching down at FAN EXPO Canada for the first time this year with nonstop programming that the whole family can experience. Over the course of the four-day show, young wizards will have a chance to find their houses in a Sorting Hat Ceremony; try their hand at the not-so-fictional game of Quidditch; learn about Robots with The Cube School of Technology; become a master builder at the immersive LEGOLAND Discovery Centre; draw outside of the lines at The Tiny Colourless Café; and so much more.

Fans can leave their broomsticks at home and save on the cost of admission when they ride the GO with FAN EXPO Combo Tickets. Plus, children (12 & under) ride GO Transit for FREE! In addition, August 22 will be Transit Thursday at FAN EXPO; guests can show their PRESTO Card at the Box Office on that day and get in for $20/adult, $15/youth & $45/family. Valid on Thursday, August 22 only.

Single Day Child and Youth Passes and All Access Family Passes, valid for two adults and up to four children are available now at fanexpocanada.com/tickets.

⁃ PRINCESS STORYTIME, SING ALONG AND MEET AND GREET

For a complete list of Family Zone programming, visit: fanexpocanada.com/en/attractions/family-zone

For all other event info including tickets, visit: fanexpocanada.com

FAN EXPO Canada™ celebrates its 25th anniversary this year, inviting fans far and wide to discover, celebrate and belong with them from August 22-25 at the Metro Toronto Convention Centre. The annual convention is the largest comics, sci-fi, horror, anime, and gaming event in Canada and the second largest in North America. This year the show floor will be packed with exciting family-friendly activities and celebrity guests including John Travolta (Grease), Jason Momoa (Game of Thrones, Aquaman), Jeff Goldblum (Jurassic Park), Zachary Levi (Shazam!), and more. The all-ages pop culture convention expects to host over 140,000 fans in 750,000 sq. ft. of the Metro Toronto Convention Centre for the four-day event. Tickets are available now at fanexpocanada.com/tickets.