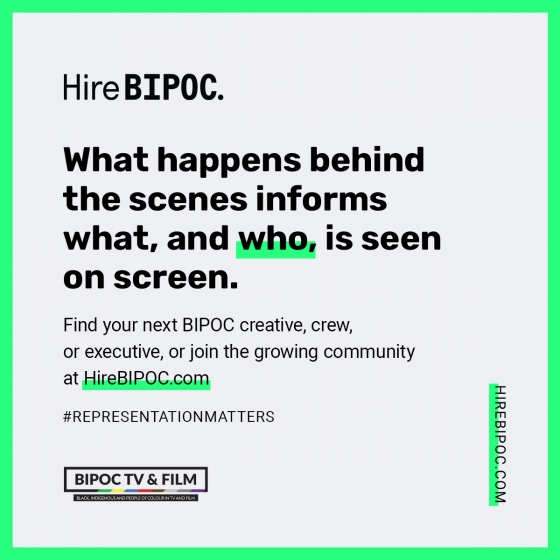 The Online Roster Launches Today With 500+ Black, Indigenous, and People of Colour Creatives and Crew

Toronto, ON - October 5, 2020 - Canada’s broadcasters and industry leaders, in partnership with BIPOC TV & FILM, are working together to eradicate systemic racism in the media and entertainment industries with HireBIPOC, an industry-wide initiative to create meaningful change around hiring practices and ensure a more inclusive workforce. Launching today, with over 500 members already registered, the online roster is an unprecedented collaboration between 20+ Canadian media organizations and signals a landmark commitment to change and action.

Canadian broadcasters Bell Media, CBC/Radio-Canada, Corus Entertainment, and Rogers Sports & Media are Foundational Partners. Bell Media, Corus Entertainment and Rogers Sports & Media have committed to making the use of HireBIPOC a specific condition of greenlight for original productions, ensuring that the site is used by internal groups and external companies. CBC/Radio-Canada urges all producers to use resources such as HireBIPOC and similar industry sites that are dedicated to amplifying talent from Black, Indigenous and People of Colour communities.

“If 2020 has taught us anything, it’s that now is the time for brave steps towards radical change. HireBIPOC is one step amongst many, in order to transform the face of our industry. We need measurable commitments to hiring more Black, Indigenous and People of Colour. We all have a circle of influence and it is up to each one of us to use it,” said Nathalie Younglai, Founder, BIPOC TV & FILM.

“Creating real, systemic change to ensure diversity, equity, and inclusion within the Canadian media industry is a long-term commitment, and a top priority for Bell Media,” said Randy Lennox, President, Bell Media. “We’re proud to make use of HireBIPOC among our production partners a condition of green light for Bell Media original productions. It is our ardent hope that HireBIPOC is a game-changer for Canadian content in seeing more Black, Indigenous, and People of Colour on screens across the country."​

“HireBIPOC is a transformational industry commitment that will drive real, sustainable change to ensure we are advancing diversity both on and off air,” said Doug Murphy, President and CEO, Corus Entertainment. “This initiative complements our proactive and comprehensive approach to diversity and inclusiveness and we are confident it will have meaningful long term impact to our audiences, our people and our partners.”

“The past several months have provided ample opportunity for reflection about the important role we all play in uplifting our most vulnerable communities. At Rogers Sports & Media, we have been listening intently and learning from our team members and partners about the steps we can take to eliminate systemic racism in Canada. This is why we recently launched our action-oriented program All IN, and now HireBIPOC is another critical initiative that will help to ensure the Canadian media industry more fairly and accurately represents the communities we serve. While there is still much work to be done, we are stronger together,” said Jordan Banks, President, Rogers Sports & Media.

“CBC/Radio-Canada is committed to supporting all industry efforts to advance the inclusion and representation of Black, Indigenous, Asian, South Asian, Middle Eastern and Latinx talent in our creative communities and original programming," said Catherine Tait, President and CEO, CBC/Radio-Canada. "Resources like this new database will ensure greater access and exposure for more racially diverse producers and creatives, both in front of and behind the camera, in order to better reflect our country across all areas of the industry.”

The initiative is further supported by an expanding list of Industry & Community Partners:

HireBIPOC is an initiative created by BIPOC TV & FILM and Bell Media in consultation with BIPOC members and support of community groups. The site has been designed and developed by the Bell Media Digital Team under the direction of Judy Lung on behalf of BIPOC TV & FILM.

HireBIPOC will facilitate and increase BIPOC hiring in the country’s screen-based industries (television, film, digital), whether Canadian or shot-in-Canada, in roles at all levels, across all areas of the industry, including production (above and below the line), behind the scenes, executives, communications & marketing, and on-air.

HireBIPOC is operated by BIPOC TV & FILM, a volunteer-run advocacy group founded nearly a decade ago with deep roots in the BIPOC community as well as a track record for practical training and educational work, and building solidarity across industry organizations.