CBC/Radio-Canada and Super Channel partner with the BBC on UK/Canada co-production THE NORTH WATER, from See-Saw Films and Rhombus Media 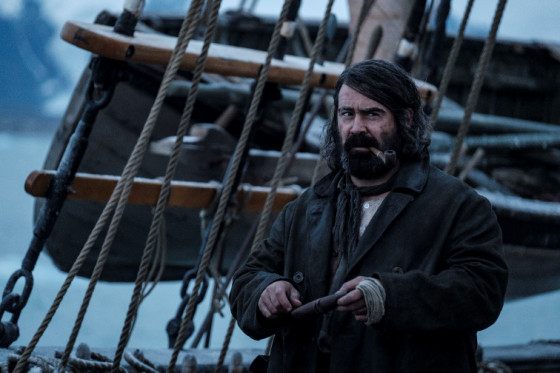 Five-part limited series starring Jack O’Connell, Colin Farrell and Stephen Graham to premiere on Super Channel this September and on CBC/Radio-Canada in 2022

July 21, 2021 – CBC/Radio-Canada and Super Channel are partnering with the BBC to bring five-part Arctic nautical adventure THE NORTH WATER to Canadian audiences across the country. Commissioned by the BBC and CBC/Radio-Canada in association with Super Channel, THE NORTH WATER is a UK/Canada treaty co-production from Canada’s Rhombus Media and the UK’s See-Saw Films. Based on the critically acclaimed, best-selling novel by Ian McGuire, the immersive drama is adapted and directed by Andrew Haigh (45 Years, Looking) and stars BAFTA-winner Jack O’Connell (Unbroken, Godless), Golden Globe®-winning actor Colin Farrell (In Bruges, True Detective), and SAG Award-winner Stephen Graham (Line of Duty, Boardwalk Empire), together with an incredible ensemble cast that includes renowned Inuit actor Natar Ungalaaq (Atanarjuat: The Fast Runner).

THE NORTH WATER will make its first Canadian debut on Super Channel Fuse on Sunday, September 19 at 9 p.m. ET with each episode available on Super Channel On Demand the day following its weekly linear broadcast, followed by wide release on CBC TV, CBC Gem, ICI TÉLÉ and ICI TOU.TV in fall 2022. Super Channel is available via most cable providers across the country, as well as Amazon Prime Video channels and the Apple TV app. THE NORTH WATER will premiere in the UK on BBC Two this fall, and is streaming on AMC+ in the U.S. this summer.

“In a borderless, global entertainment marketplace, The North Water exemplifies our strategy to collaborate to compete by joining forces and combining resources with broadcasters and producers in Canada, the UK and around the world to bring our audiences distinct, world-class storytelling,” said Catherine Tait, President and CEO, CBC/Radio-Canada.

“We are thrilled to be collaborating with CBC/Radio-Canada and the BBC to bring this epic tale of murder, mystery and survival to Canadian audiences,” said Don McDonald, President and CEO, Super Channel.

“It has been a great pleasure to see Andrew Haigh's singular vision brought to life on screen,” notes Executive Producer Niv Fichman of Rhombus Media. “With the support of our partners at CBC/Radio-Canada and Super Channel, we were able to create an ambitious and harrowing saga we can’t wait to share with Canadian audiences.”

Set in the UK and the ice floes of the Arctic in the late 1850s, the series tells the story of Patrick Sumner (O’Connell), a disgraced ex-army surgeon who signs up as the ship’s doctor on a whaling expedition to the Arctic. But the ferocity of the elements is matched by the violence of his crew mates, including Drax (Farrell), a harpooner and distinctly brutal force of nature. As the true purpose of the expedition becomes clear, confrontation between the two men erupts, taking them on a journey far from solid ground and way beyond the safe moorings of civilization.

THE NORTH WATER was filmed primarily in Budapest and on the frozen seas north of the Svalbard Archipelago. The cast and production team sailed as far as 81 degrees north to film sequences in the pack ice, which is believed to be the furthest north a scripted drama series has ever filmed. While plans to shoot in Nunavut had to be curtailed due to the COVID-19 pandemic, a smaller local unit in Iqaluit stepped in to properly represent and authentically capture the vastness of the Canadian Arctic.

In July 2019, the BBC and CBC/Radio-Canada announced a commitment to collaborate across a range of different areas.

A BBC and CBC/Radio-Canada original series in association with Super Channel, THE NORTH WATER is produced by See-Saw Films and Rhombus Media and distributed internationally by BBC Studios.

Executive producers on the series are Jamie Laurenson, Hakan Kousetta, Iain Canning and Emile Sherman for See-Saw Films, Niv Fichman for Rhombus Media, Jo McClellan for the BBC and writer/director Andrew Haigh. In addition, Rhombus Media’s Fraser Ash and Kevin Krikst are co-executive producers and Claude Paiement is co-producer on behalf of Montreal’s N63 Films. THE NORTH WATER is produced in association with the Canada Media Fund.

CBC/Radio-Canada is Canada’s national public broadcaster. Through our mandate to inform, enlighten and entertain, we play a central role in strengthening Canadian culture. As Canada’s trusted news source, we offer a uniquely Canadian perspective on news, current affairs and world affairs. Our distinctively homegrown entertainment programming draws audiences from across the country. Deeply rooted in communities, CBC/Radio-Canada offers diverse content in English, French and eight Indigenous languages. We also deliver content in Spanish, Arabic Chinese, Punjabi and Tagalog, as well as both official languages, through Radio Canada International (RCI). We are leading the transformation to meet the needs of Canadians in a digital world.

Rhombus Media is a Toronto-based production company that over the past 40+ years produced and released some 200 feature films and television projects, receiving literally hundreds of awards, including numerous Genies, Geminis, several Emmys and an Oscar. Some of the company’s more notable films are Thirty-Two Short Films About Glenn Gould, The Red Violin, Clean, Enemy, Last Night, Blindness, Into The Forest, Closet Monster, and Hobo With A Shotgun. Possessor, Rhombus’ most recent film, written and directed by Brandon Cronenberg and starring Andrea Riseborough & Christopher Abbott, premiered to much acclaim at the 2020 Sundance Film Festival and was subsequently released by Neon in the US and a number of distributors worldwide.

For television, it was recently announced that Rhombus Media would be heading into production on The Sympathizer, a co-production with A24 for HBO, directed by Park Chan-wook based on the Pulitzer Prize winning novel and co-starring Robert Downey Jr. Andrew Haigh’s The North Water, a co-production with See-Saw Films in the UK, starring Colin Farrell & Jack O'Connell, was released this month by AMC+ in the US, and subsequently by BBC Two and BBC iPlayer in the UK and CBC and Super Channel in Canada. Previous Rhombus series include the highly renowned Sensitive Skin for HBO Canada, starring Kim Cattrall & Don McKellar; and the internationally celebrated Slings & Arrows, an 18-part multi-award winner broadcast on TMN and Movie Central in Canada, the Sundance Channel in the US and numerous networks around the world. Other notable television projects include Le Dortoir, Pictures on the Edge, and Yo-Yo Ma: Inspired By Bach, all of which received International or Prime-Time Emmy awards.

See-Saw Films is a world leading television and film production house, founded in 2008 by Academy Award®, BAFTA and Emmy winning producers Iain Canning and Emile Sherman, with offices in London and Sydney.