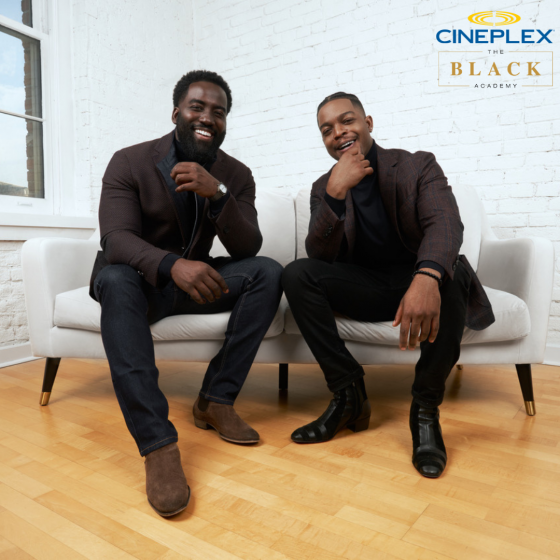 Toronto, ON, February 1, 2021 – Cineplex is proud to partner with The Black Academy in celebration of Black History Month. Throughout the month of February, a curated collection of over 100 films will be on offer to movie-lovers across Canada through the Cineplex Store .This collection of important films was curated to elevate Black history, artists and filmmakers and includes such titles as Harriet, Selma, 42, If Beale Street Could Talk and Race.

“We are proud to support The Black Academy and to partner with them in the promotion and elevation of these important films during Black History Month,” said Sarah Van Lange, Executive Director of Communications, Community and Social Media, Cineplex. “Our team has long admired the work of Shamier Anderson and Stephan James and see a lot of opportunity to partner down the road to support their mission of breaking down barriers of discrimination and combating systemic racism in Canada through the arts.”

“We are grateful to Cineplex and movie fans across the country for this contribution to The Black Academy,” said Martha Hagos, Director of Operations, The Black Academy. “Partnerships such this one enable us to fund programming that elevates, educates, and celebrates Black talent in Canada.”

Created in consultation with The Black Academy, Cineplex’s Black History Month collection is a curated list of over 100 feature films some of which recognize significant historical contributions to Black history and the Civil Rights Movement. The entire collection elevates Black stories, artists, and filmmakers, allowing movie-lovers the opportunity to discover, learn, and celebrate these essential films.

About The Black Academy

Canadian actors, brothers, and Scarborough-natives Shamier Anderson and Stephan James co-founded The Black Academy to combat systemic racism in Canada. The Black Academy is dedicated to celebrating Black talent from across the country and inspiring generations to come through education, mentorship, and recognition. Anderson and James, in partnership with Insight Productions, will produce a nationally televised award show featuring award presentations, performances, and tributes, and showcasing Black talent from across Canada. A permanent, year-round, and national operation, The Black Academy is a division of the not-for-profit Building a Legacy in Acting, Cinema, and Knowledge (B.L.A.C.K) Canada. The division was launched in 2020 and is based in Toronto. www.BlackIsNow.com Instagram: @BLACKISNOWCANADA