FAN EXPO Canada Reunites the Cast of Saved By the Bell, The Goonies and Blade Runner 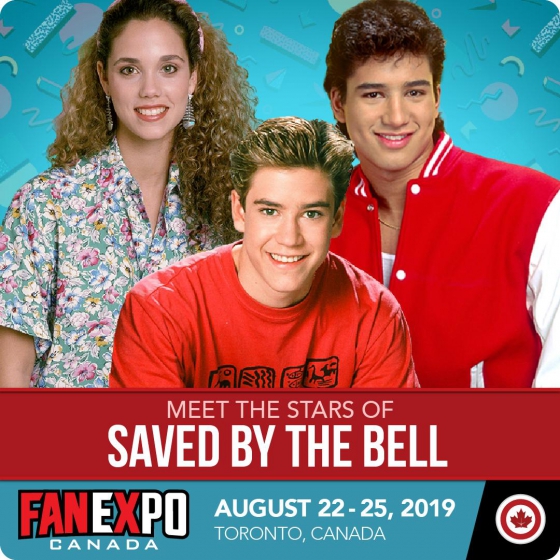 TORONTO, ON (July 8, 2019) – Hey you guys! As FAN EXPO Canada looks back on 25 years of fandom, it will be celebrating with some of the most iconic pop culture characters of all time, reunited under one roof. Fans will have an opportunity to revisit Bayside High with Saved by the Bell alumni Mario Lopez, Mark-Paul Gosselaar and Elizabeth Berkley; do the Truffle Shuffle with The Gooniesthemselves, Sean Astin, Corey Feldman and Ke Huy Quan; and meet the cast of Blade Runner, Sean Young, Rutger Hauer and Edward James Olmos in the exact year the original film was set, 2019. The show is also introducing fresh and dynamic programming this year including the Rocket League North American Championship Grand Finals, a Cosplay Masquerade Ball, a 10,000 sq. ft. Family Zone, and more.

As North America’s largest pop culture convention, FAN EXPO Canada invites fans of all ages to discover, celebrate and belong at the Metro Toronto Convention Centre from August 22-25, 2019 – one week earlier than in previous years. Tickets are on sale now at fanexpocanada.com/tickets.

“Each year we aim to curate unique experiences for the next generation of pop culture and genre fanatics while staying true to the purists who have been with us since the beginning, and this year is no exception,” said Andrew Moyes, Vice President, FAN EXPO HQ. “Between the star-studded guest list and exciting new offerings, we can’t wait to celebrate our 25th year with the fans.”

New this year, fans can save on the cost of admission and travel together when they ride the GO with FAN EXPO Combo Tickets. Combo tickets include admission to the event and round-trip travel on GO Transit services. With Union Station conveniently located only a few minutes away from the Metro Toronto Convention Centre, getting to the event is easy on GO transit. In addition, August 22 will be Transit Thursday at FAN EXPO; show your PRESTO Card at the Box Office on that day and get in for $20/adult, $15/youth & $45/family. Valid on Thursday, August 22 only.

Programming highlights that fans can to look forward to at FAN EXPO Canada 25 include:

BLAST FROM THE PAST

Get those nostalgia glasses on! FAN EXPO Canada is bringing back favourites from the 80s and 90s with the reunion of the casts of the Sci-fi blockbuster Blade Runner; the family classic, The Goonies; animation sensation Transformers; and the TV hit, Saved by the Bell!

The legendary Jim Lee joins an amazing line up of comic creators coming to FAN EXPO Canada including Todd McFarlane, Greg Capullo, Donny Gates, Marguerite Bennett and more. See their stunning work in person, grab an autograph or print, watch a sketch duel or learn insider tricks of the trades with this year’s comic programming lineup.

Get a Can-con fix! FAN EXPO Canada is welcoming the cast of two homegrown hits! Spend some time with the residents of Dog River as we welcome the cast of Corner Gas Animated! Plus, don’t forget to say hi to Appa and the rest of the gang from Kim’s Convenience.

Adventure and discovery awaits fans of all ages this summer in the all-new 10,000 sq. ft. Family Zone, complete with its own dedicated program stage. Fans young and young at heart can experience fun and interactive programming including, a Hogwarts Sorting Hat Ceremony, Quidditch Matches, Medieval Sword Fighting, basketball playing robots, fun with LEGO, character meet and greets, dance parties and more! Stop by the Temporary Tattoo Alley for your exclusive chance to sport your fandom pride on your skin. Single Day Child and Youth Passes, as well as Family Passes valid for two adults and up to four children are available now at fanexpocanada.com/en/buy-tickets.

Fans are invited to celebrate 25 years of FAN EXPO Canada in the Imperial Room at the Fairmont Royal York on Saturday, August 24 for a night of masks, mystery and dancing at the Cosplay Masquerade Ball. The Ball will be complete with music, drinks, and special giveaways. Be sure to stay until midnight for the traditional masquerade ball un-masking.

Cosplay returns to FAN EXPO Canada with the largest-ever programming track spanning over the entire four-days of the show. New this year, fans will have the opportunity to be the stars as they show off their costume on the Cosplay Red Carpet or take their cosplay craftsmanship to the next level with a number of hands-on workshops and panels happening throughout the weekend. Kids can get into the fun at the Kids Costume Contest. Plus, professional cosplayers Yaya Han, Vamp, Phil Mizuno and the 2018 Masters of Cosplay Champion Silhouette Cosplay will show their costuming skills on the convention floor throughout the weekend. A full programming and guest lineup will be announced in the coming weeks. For scheduling updates please visit fanexpocanada.com/en/attractions/cosplay.

Esports fans won’t want to miss the Rocket League WGN North American Championship Grand Finals, taking place at FAN EXPO Canada on August 24-25. An exclusive open qualifier will be held on the show floor on August 23-24 to select an eighth and final team to compete in the elite competition. Fans that prefer to watch it all unfold are invited to spectate for what is sure to be the Rocket League event of the summer.

Fans can test their knowledge of their favourite film and TV series in two live adventure games that will keep them guessing using various clues, hints and suggestions to unveil the secret plot hidden within.

Back by popular demand, speed dating is returning to FAN EXPO Canada. Fans can join in the fun throughout the weekend and experience the thrill of meeting their potential soulmate, future spouse or someone to spend the day with on the convention floor. On-site sign up only. This is a 19+ event.

Indie meets pro in this special area where fans will find all of their favourite pencillers, inkers and writers. A "must experience area" for anyone interested in meeting rising stars who work the front lines of the industry. Featuring everything from comics, graphic novels, limited edition prints and best of all, original art and sketches.

Over 900 retailers from all over join FAN EXPO Canada to make the experience an unforgettable one. Specializing in everything comics, anime, gaming, science fiction and horror, these retailers have what every fan needs. Whether it’s a comic books from any era, original artwork, graphic novels, memorabilia, DVDs, videos, games, toys or t-shirts – fans can find it all on the convention floor.

FAN EXPO Canada™ celebrates 25 years of inviting fans far and wide to discover, celebrate and belong with them from August 22-25, 2019 at the Metro Toronto Convention Centre. The annual convention is the largest comics, sci-fi, horror, anime and gaming event in Canada and the second largest in North America. This year the show floor will be packed with exciting family-friendly activities and celebrity guests including Jason Mamoa (Game of Thrones, Aquaman), Rainn Wilson (The Office), Jeff Goldblum (Jurassic Park), Zachary Levi (Shazam!) and more. The all-ages pop culture convention expects to host over 130,000 fans in 750,000 sq. ft. of the Metro Toronto Convention Centre for the four-day event. Tickets are available now at fanexpocanada.com/tickets.