MADE IN CANADA: A SUMMER BLOCKBUSTER SERIES ROLLS INTO DRIVE-INS ACROSS THE COUNTRY 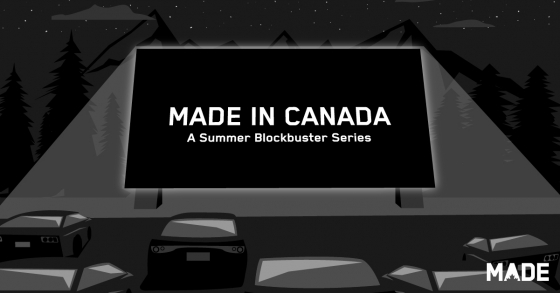 TORONTO, ON (June 25, 2020) – MADE | NOUS today announced the launch of MADE in Canada: A Summer Blockbuster Series which will see the return of some of the biggest Canadian-made films to drive-ins and cine-parcs across the country July 3 to September 8. The pandemic abruptly halted Canadian film productions, impacting the jobs of thousands who work in the vibrant Canadian film production industry. The films in the Series were specifically curated to celebrate the big blockbuster productions that were brought to life by Canadian crews and/or Canadian post-production houses. Free to attend, the Series will offer audiences an opportunity for a COVID-safe, socially distanced outing under the stars to enjoy some of their most beloved films.

Festivities will kick off on July 3 with Academy Award-winning epic ARRIVAL from Canadian director Denis Villeneuve. The sci-fi spectacle has a special connection to Canada with shooting locations all around Quebec and the VFX artistry by Quebec-based companies including Alchemy 24, Folks, Hybride, MELS, Oblique FX, Raynault VFX and Rodeo FX.

All Toronto screenings will be hosted in partnership with Downsview Park’s popular Friday Night Light Series. Other various drive-ins and cine-parcs across the country will screen a selection from the Series.

Additional films and locations will be announced throughout the summer. Summer Blockbuster Series locations and dates currently include:

ABOUT MADE | NOUS
MADE | NOUS celebrates the works of Canadian creators in film, television, video games and digital entertainment, both here and around the world. Canada is home to award-winning television, movies, and special effects that have captured global audiences and swept box offices worldwide. MADE | NOUS shines a spotlight on the achievements of Canadians who bring exceptional stories to life, and encourages audiences to discover and celebrate their work. MADE | NOUS is the result of a collaborative effort between key entertainment industry players such as the Canada Media Fund (CMF) and Telefilm Canada, as well as an additional thirty—and growing—industry partners. For more information, visit made-nous.ca.