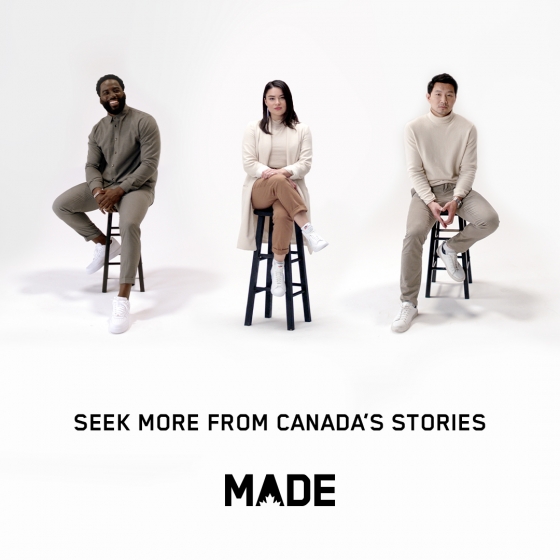 This multi-media campaign is brought to life through powerful first person stories from each ambassador sharing their experiences working in the entertainment industry and what representation in front of and behind the camera means to them. The English PSA is directed by Raha Euphoria of Toronto, with Montreal-based director Edith Jorisch helming the French PSA.

Canadians searching for screen-based content from a variety of under-represented, racialized and Indigenous communities can visit the updated MADE website for more information including Seek More recommendations at made-nous.ca/seekmore.

“Who I embody on screen is important because there's a direct correlation to how that influences young people and how they see themselves and how the world sees them,” said actor, co-founder of B.L.A.C.K. and The Black Academy, and Seek More ambassador Shamier Anderson. “What we see is what we believe; that’s why representation is so important. We need to be able to visualize Black people in all walks of life.”

“It’s important for Indigenous people to be included in the telling of our own stories because it brings authenticity, and lets us show the many different ways there are to be Indigenous. So often we’ve only seen tragic Indigenous stories on screen - but what about funny stories, love stories, or dramatic stories not based in tragedy - those should be brought to the screen and celebrated too,” said actor, filmmaker, writer, activist, and Seek More ambassador Kawennáhere Devery Jacobs. “I’m fighting for a better future for Mohawk children and queer children and the future of our stories in this industry.”

“After immigrating to Canada at the age of five, I knew that this country celebrated multiculturalism and prided itself on its inclusion and diversity efforts, but when I turned on the TV or went to the movie theatre, I didn’t see myself. I loved escaping into these different worlds but there was always a caveat, a sense that because of the way I looked and because of where I came from that I didn't quite belong,” said actor and Seek More ambassador Simu Liu. “What I create now, I really feel like I lacked growing up - positive Asian Canadian characters with nuanced stories. When you have more underrepresented voices behind and in front of the camera, everybody wins.”

Shamier Anderson is a Scarborough-born actor, producer, and writer and the president of Borough Bredd Productions. In 2016, Anderson co-founded B.L.A.C.K. with his brother Stephan James. Alongside his brother, he is the co-chair and co-founder of The Black Academy, a division of B.L.A.C.K., which aims to combat systemic racism while honouring, celebrating, and inspiring Black talent in Canada. Anderson was recently appointed to the Canadian Academy’s board of directors and is an ambassador for the Academy’s Equity & Inclusion Fund.

Anderson was named a TIFF Rising Star (2019) and recently sold his story, Super High, to New Line Cinema. Anderson will executive produce the film which stars Andy Samberg, Common, and Craig Robinson. Anderson stars in Stowaway for Netflix opposite Anna Kendrick, Toni Collette, and Daniel Dae Kim (streaming on Prime Video in Canada); in Halle Berry’s directorial debut Bruised which premiered at TIFF 2020; and next up will lead Simon Kinberg’s epic upcoming series Invasion for AppleTV+. Anderson co-founded Bay Mills Investment Group with his brothers Sheldon James (CEO) and Stephan James with a mission to transform and increase diversity in technology, venture capital, and entrepreneurship in Canada.

Born and raised in the Kanien'kehá:ka Mohawk Territory in Quebec, Jacobs is a multi-talented artist who in addition to being an active voice for Indigenous and LGBTQ2+ issues, has made extensive contributions to the Canadian film and television industry through her work as an actor and creator. Jacobs first broke onto the scene with her Canadian Screen Award-nominated performance in Rhymes for Young Ghouls in 2013. Since then, she’s had a long and exciting career with roles including Jeff Barnaby’s 2019 zombie film Blood Quantum, the hit CTV series Cardinal, Netflix’s supernatural series The Order, joined the cast of the critically acclaimed series for Season 2 of Neil Gaiman’s American Gods as Sam Black Crow, and was recently announced as joining the cast of the upcoming Taika Waititi-executive produced half-hour comedy series Reservation Dogs. A filmmaker herself, Jacobs has written and directed two award-winning short films and is currently in post-production on her first feature-length film, This Place, in which she co-wrote and starred in.

Simu Liu is a Canadian-Chinese talent who is Marvel's next leading man in Shang-Chi and the Legend of the Ten Rings opposite Tony Leung and Awkwafina. He most recently wrapped a leading role opposite Mark Wahlberg in Simon Cellan Jones/Lionsgate's Arthur the King. He can be seen in Lissette Feliciano's SXSW directorial debut, Women is Losers.

He's most well-known for his starring role as "Jung" in the CBC/Netflix hit, Kim's Convenience. Other credits include Awkwafina is Nora from Queens, Fresh Off the Boat, The Expanse, Designated Survivor, Taken, Blood & Water, and Orphan Black.

He is an outspoken activist, passionate on Asian representation, identity and culture.

Launched in 2019, MADE | NOUS celebrates the works of Canadian creators in film, television, video games and digital entertainment, both here and around the world. Canada is home to award-winning television, movies, and special effects that have captured global audiences and swept box offices worldwide. MADE | NOUS shines a spotlight on the achievements of Canadians who bring exceptional stories to life, and encourages audiences to discover and celebrate their work. MADE | NOUS is the result of a collaborative effort between key entertainment industry players such as the Canada Media Fund (CMF) and Telefilm Canada, as well as an additional thirty—and growing—industry partners. For more information, visit made-nous.ca.