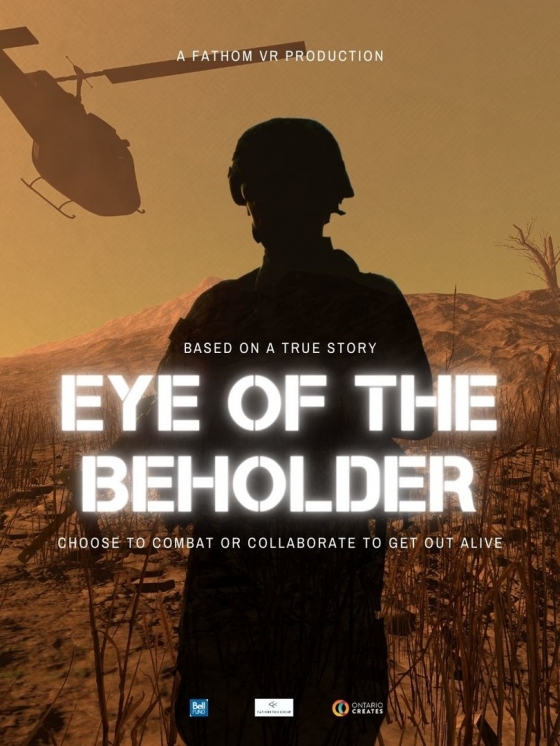 Feature length version of MY ENEMY, MY BROTHER to premiere on streaming service Sundance Now on December 21st

Toronto, ON (November 10, 2020) – Fathom Media has announced its latest VR experience EYE OF THE BEHOLDER, the genesis of which was inspired by the 2016 Oscar-shortlisted documentary short MY ENEMY, MY BROTHER by award-winning filmmaker Ann Shin. This desktop and VR experience immerses the player in an intense and dramatic 20-minute journey in which participants will encounter other soldiers that may be a friend or foe. EYE OF THE BEHOLDER subverts the war-game genre as players must choose to combat or collaborate with others, which ultimately determines who gets out alive, and aims to show participants how we prejudge others, and the consequences of those assumptions. The VR experience will be available on Steam Tuesday, December 1st in advance of the SVOD premiere of the feature film on AMC Networks’ streaming service Sundance Now on Monday, December 21, 2020 in the United States and Canada.

“The connection that Zahed and Najah have in MY ENEMY, MY BROTHER is a profound example of the humanity that binds us despite our cultural and political differences. It’s a message that is crucial now more than ever,” said Ann Shin, Fathom. “At Fathom we believe our films’ universal themes can be expressed through a variety of different media to allow audiences to be fully immersed in the story and directly engage with the film’s core message.”

MY ENEMY, MY BROTHER began as a short film in 2015 that went on to be shortlisted for the 88th Academy Awards. The documentary short follows Zahed and Najah who are two former enemies from the Iran-Iraq War who become blood brothers for life. Both men fought in the war where Zahed finds Najah injured in a bunker and decides to risk his own life to save him. Zahed kept Najah alive for days, after which Najah was finally taken as a prisoner of war. Until one day 20 years later they meet again by sheer coincidence. As a result of the success of the short, the filmmakers followed up with a full-length documentary in 2017 that shows Zahed and Najah returning to their homelands to look for missing loved ones. Their journey takes them into the heart of present-day conflicts in a region ravaged by war and ISIS. Their quest is a surprising affirmation of redemption and humanity. This incredibly moving feature will be available to stream on Sundance Now on December 21, 2020 in the United States and Canada.

Ann Shin is a multiple award-winning director known for compelling films and series that have aired on CBC, HBO, ABC, TVO, CBC The Documentary Channel, PBS, Discovery Channel, HGTV, History Channel among others. Her film MY ENEMY, MY BROTHER premiered at Tribeca Film Festival and was shortlisted for a 2016 Academy Award, and nominated for an Emmy. The feature version won Grand Jury Prize at SDAIFF, the short version Her cross-platform project THE DEFECTOR: ESCAPE FROM NORTH KOREA film and interactive won Best Documentary, Best Documentary Director and the Diversity Award at the Canadian Screen Awards. THE DEFECTOR INTERACTIVE won the FITC Award, the Canadian Digi Award, and at the SXSW Interactive Festival.

About Fathom:
Fathom produces innovative films and series, VR projects and cross-platform engagement campaigns that have garnered numerous awards including Canadian Screen Academy Awards, coveted Digi Awards, Emmy and Oscar nominations. Fathom works with broadcasters and brands in all territories​,​ and their work has been broadcast, screened and shared in Canada and the US, and around the world. Fathom’s award winning producers and directors collaborate with you to create ​stories that resonate with your ​clientele and help you reach new ​audiences.​ ​In addition to commercials, Youtube and Facebook video campaigns​, Fathom leverages long-standing relationships with national and international broadcasters to partner ​brands with broadcaster​​s in mainstream media. For more information visit fathomfilm.ca.