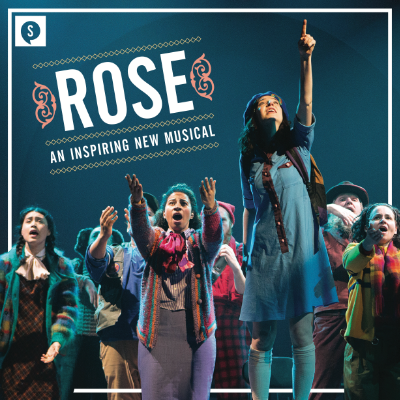 Toronto, ON – May 30, 2019: Soulpepper Theatre Company today announced the world-wide digital release of the Original Cast Recording of its first-ever original musical,Rose, following a record 11 Dora Mavor Moore Award nominations. The Original Cast Recording will be available on Spotify, iTunes, and Apple Music on Friday, May 31. The company proudly acknowledges their 27 Dora Mavor Moore Award nominations from 7 different productions from its 2018-19 lineup.

LISTEN to the Audio Teaser for the Original Cast Recording of Rose here.

Following the success of past Soulpepper albums including Spoon River and Alligator Pie, Soulpepper is pleased to present the Original Cast Recording of this new Canadian musical Rose. Rose was Soulpepper’s first-ever fully-original musical, three years in the making, and had a successful run from January 17 to February 24, 2019. Based on Gertrude Stein’s little known children’s book The World Is Round, Rose was one of the company’s most ambitious productions to date. This inspiring new musical was created by Soulpepper Academy graduates and company members Sarah Wilson and Slaight Family Director of Music Mike Ross (co-creator of Spoon River, Critics’ Pick – New York Times).

“Musicals take on a new life when the albums are made available to the public, and the international release of the music from Rose expands the footprint of Canadian musical theatre,” said Weyni Mengesha, Artistic Director of Soulpepper. “We are thrilled that this Dora nominated production will find new audiences through the release of the music that inspired and touched thousands of people throughout its run.”

“We had so many requests from people of all ages who had seen the show and really wanted to hear it again. Like, immediately. It was flattering and we’re so glad that we had a plan in place to capture the music from this show. It sounds fantastic and reminds me of what an extraordinary ensemble we have,” said Mike Ross and Sarah Wilson, co-creators of Rose.

"Capturing this cast album, with all of its musical and lyrical complexity, and complete with its live performance virtuosity, energy and heart, is a testament to the unique qualities of the Soulpepper ensemble. It's an extraordinary accomplishment,” said Gregory J. Sinclair, Director of Audio Programming.

Under the direction of Gregory J. Sinclair, Soulpepper’s Director of Audio Programming, the company has proudly built an international award-winning catalogue of digital programming that has garnered listeners from over 50 countries. In the last year alone, Soulpepper released four concert albums and two audiobooks, including The Secret Chord: A Leonard Cohen Experience, Riverboat Coffee House: The Yorkville Scene, A Moveable Feast: Paris in the ‘20s, and The 27 Club.  In partnership with Rakuten Kobo, the two audiobooks released were A Christmas Carol by Charles Dickens adapted by Michael Shamata, and The Marrow Thieves by Cherie Dimaline, narrated by Meegwun Fairbrother.

A Christmas Carol is currently a Finalist in the 2019 New York Festivals Radio Awards. With entries from over 50 countries, this year’s NYF Radio Awards presented a strong global competition. This is the fourth consecutive year that the Soulpepper audio project has been recognized at this international festival: The Complete 150 – Finalist 2018;Alligator Pie – Gold Medal 2017; Spoon River – Silver Medal 2016.  The achievement of A Christmas Carol audiobook and the Rose Original Cast Recording represents Soulpepper’s ongoing commitment to sharing work on digital platforms beyond the stage.

Soulpepper’s current Spring season continues with Tarell Alvin McCraney’s The Brother’s Size, directed by Mumbi Tindyebwa Otu which was extended to June 1 due to popular demand; August: Osage County by Tracy Letts, directed by Jackie Maxwell; and a new concert from Mike Ross and Tom Allen, 88 KEYS. Information on Soulpepper’s previously announced 2019 Summer-Fall season can be found at soulpepper.ca/performances.

Tickets for Soulpepper productions start at $38 and $35 for Soulpepper Concerts. Tickets are available by calling the Young Centre Box Office at 416.866.8666 or by visiting soulpepper.ca. All ticket prices include a Young Centre facility fee, service charge and HST. Pricing is subject to change.

Support for the Soulpepper Academy is provided by the Canada Arts Training Program at the Department of Canadian Heritage.

Soulpepper is grateful for the major sponsorship support of:
Scotiabank