New to the festival: The Genre Zone, The Canadian Stage, Spelling Bae, and an expanded Book Club 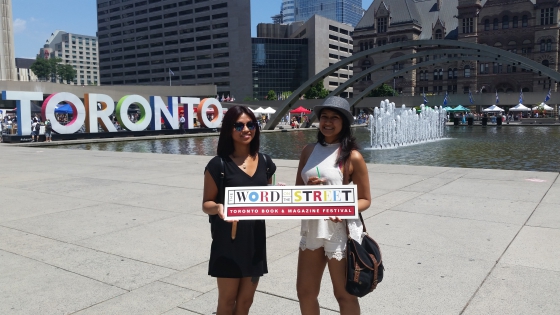 The Word on the Street, Toronto’s premier literary event, is set to thrill booklovers by welcoming the country’s newest and most celebrated authors and poets, and with new offerings for fan girls and fan boys, magazine enthusiasts, and word nerds. The 27th edition of the festival will take place on Sunday, September 25, 2016 at the Harbourfront Centre. Visit The Word On The Street’s website for more information.

“Each year we try to find ways to bump up the fun factor for those who love the written word,” said The Word On The Street Interim Director Evan Munday. “We’re extremely proud of the range of programming we offer for book fans of all ages. From sports, history, humour to poetry, cooking, politics, and fiction, there is something for everyone to enjoy. This year, based on audience feedback, we’re also showcasing genre writers and magazine editors on their own stages, and giving attendees the chance to test out their spelling skills.”

The Great Books Marquee features literary talent from across the nation, including Murdoch Mysteries creator Maureen Jennings, CBC Debaters host Steve Patterson, Pride Toronto Grand Marshall Vivek Shraya, and authors of two of the year’s hottest thrillers: Amy Stuart (Still Mine) and Iain Reid (I’m Thinking of Ending Things). The Vibrant Voices of Ontario Tent will host literary readings on the bro lifestyle by Jowita Bydlowska (Guy, Drunk Mom) and stories of trans life from Chase Joynt (You Only Live Twice), in addition to much more. The ever-popular Wordshop Marquee, programmed by the Humber School for Writers, provides informative talks on publishing where festivalgoers can learn about writing memoirs from Craig Davidson and Cathie Borrie, have their manuscripts evaluated by working Canadian editors, and get a lesson on publication from former head of Penguin Canada, Cynthia Good. Click here for the full programming lineup.

Non-fiction fans can relish the Nothing But The Truth Tent featuring culture writers John Semley and Soraya Roberts discussing their new books that chronicle and dissect two cult TV favourites, The Kids in the Hall and My So-Called Life; Subdivided editor Jay Pitter and Multicultural Cities author Mohammad Abdul Qadeer discussing urban development and diversity; and Teva Harrison and Kenneth Sherman, two authors diagnosed with cancer, delve into the deep connections between illness and creativity. Clickhere for the full Nothing But The Truth Tent lineup.

New to the 2016 Festival lineup are: The Genre Zone, a must-attend destination for genre fans at the festival featuring all the best in Canadian science fiction, fantasy, mystery, horror, and comic books; The Canadian Magazines Stage, an outdoor venue featuring readings and panel discussions among journalists and editors from leading Canadian print and online magazines who tackle issues facing the periodical industry, including Canadian Identity, Canadian Fashion Sense, and Green Magazines; a more exclusive Book Club where 12 lucky participants have been selected to access one of two private meet-and-greets with two authors from the festival lineup, in addition to being given a complimentary copy of the featured books; and Spelling Bae, allowing adults and kids to rediscover their spelling capacity with a good old-fashioned spelling bee. Click here for a full programming lineup.

Find entertainment for the whole family at the young adult stage with the This is Not the Shakespeare Stage, featuring OCDaniel’s Wesley King, Once in a Town Called Moth’s Trilby Kent, and the authors of the very popular Seven Series Prequels; TD Children’s Literature Stage with favourites Bill Slavin, Kellen Hatanaka, Susan Hughes, and Jael Richardson; and the Sago Mini Children’s Activity Stagewhere you can make skunk balloons with author Thao Lam (Skunk on a String) or sock puppets with Carey Sookocheff (Solutions for Cold Feet). Click here for the full programming lineup.

The Word On The Street connects readers with their favourite authors and allows them to discover new talent, and attendance is completely free. The full 2016 programming schedule will be released early August. This year’s festival takes place on Sunday, September 25, from 11:00 a.m. until 6:00 p.m. at Harbourfront Centre.