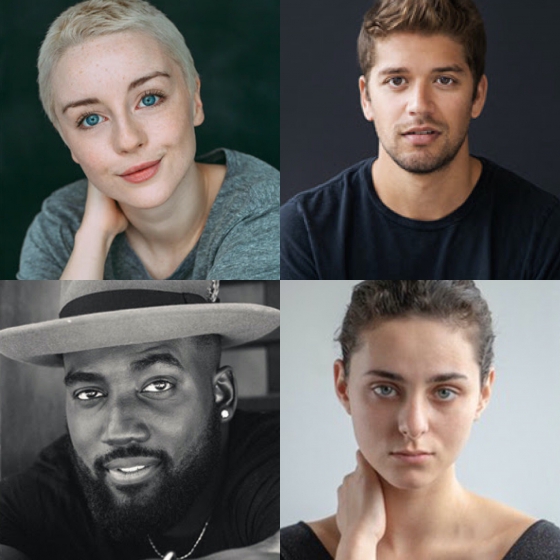 TORONTO, ON (July 31, 2019) — TIFF Co-Heads Cameron Bailey and Joana Vicente announced today the next generation of Canadian TIFF Rising Stars. The programme returns for its ninth year with a diverse group of talented young men and women. This year’s Canadian lineup consists of Kacey Rohl, Mikhaïl Ahooja, Nahéma Ricci, and Shamier Anderson. The programme will showcase and help nurture the talent of four of Canada’s most exciting up-and-coming actors.

“With such a wealth of homegrown talent, selecting the Canadian Rising Stars is never an easy task,” said Cameron Bailey, Artistic Director and Co-Head of TIFF. “We were blown away by this group and deeply impressed by these young, up-and-coming voices. I have no doubt they’ll go on to do big things, just like the Rising Stars who came before them.”

All Rising Stars are featured in films in TIFF 2019’s Official Selection. Kacey Rohl stars in White Lie, a World Premiere in our Contemporary World Cinema programme, directed by Canadian filmmakers Calvin Thomas and Yonah Lewis. Mikhaïl Ahooja is featured in the Midnight Madness film The Twentieth Century, directed by Matthew Rankin and following a young William Lyon Mackenzie King in his quest to be the Prime Minister of Canada. Nahéma Ricci will appear in Sophie Deraspe’s Antigone, a coming-of-age drama in the Contemporary World Cinema selection, and Shamier Anderson will be featured alongside Shailene Woodley, Sebastian Stan, and Jamie Dornan in Drake Doremus’s Endings, Beginnings, which will have its World Premiere in the Special Presentations programme.

TIFF will announce its four international Rising Stars on August 15.

About the Canadian Rising Stars

Mikhaïl Ahooja
Mikhaïl Ahooja is a Montreal-based actor who is very active in Quebec. He has appeared in numerous plays, TV shows, and movies. Recent television credits include Au secours de Béatrice (14– ),Prémonitions (16– ), and Juste nous deux (19–). He has also starred in the feature films La Maison du pêcheur (13), Fabuleuses (19), and The Twentieth Century, which is making its World Premiere at TIFF 2019.

Nahéma Ricci
Nahéma Ricci was born in Montreal. As an interpreter, she has participated in multiple film projects and the stage production cet intervalle (17). As a performer, Ricci’s onscreen credits include Ailleurs (17) andAntigone, which is making its World Premiere at TIFF 2019. She is also the author, director, and interpreter of the play Identikit (19), which was presented at Montreal’s Fringe Festival. She recently completed the 2018–19 Dance as a Profession program at Danceworks in Berlin. In the near future, she will appear in the independent drama Before El Finâ.

Shamier Anderson
Select television credits include Wynonna Earp (16– ) and Amazon’s Goliath (18), on which Anderson is a regular. Notable features include Across the Line (15); roles opposite Nicole Kidman in Destroyer, which premiered at TIFF 2018, and opposite Johnny Depp in City of Lies (18); and Endings, Beginnings, which is premiering at TIFF 2019. Anderson recently wrapped on Spike Lee’s Son of the South andStowaway, opposite Anna Kendrick. Anderson and his brother Stephan James co-founded the B.L.A.C.K. Ball, an event hosted in Toronto during TIFF and in Los Angeles during Oscars season.