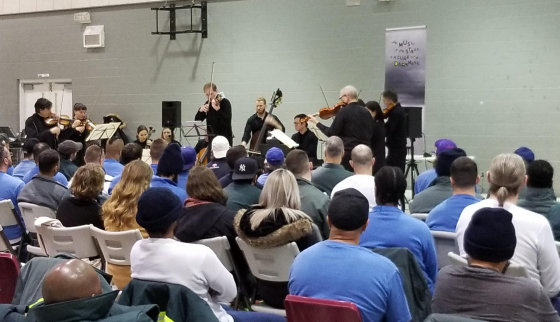 Toronto, ON—November 22, 2019—The Toronto Symphony Orchestra (TSO) recently partnered with Looking at the Stars to bring 11 musicians into select correctional institutions across Ontario. On November 18, The TSO Chamber Soloists, curated and led by Concertmaster Jonathan Crow, performed Vivaldi’s Four Seasons for over 400 inmates from the Collins Bay and Warkworth Institutions. These prison concerts are making history and are also a part of the TSO’s larger mandate to bring music to communities who might otherwise not have access.

“TSO musicians have been working with Dmitri Kanovich and Looking at the Stars Foundation for some time, performing in prisons across Ontario,” said Aaron McFarlane, the TSO’s Director of Education & Community Engagement. “Those of us who work with orchestras know the comfort that music can provide, but, after seeing first-hand the impact the music has on inmates, we made the commitment to partner in a more official capacity by making these concerts part of our season.”

“We are delighted with the opportunity to collaborate with such committed musicians through our engagement with the Toronto Symphony Orchestra. Their participation elevates our work that brings hope and dignity to the recipients of our classical music gifts in the darkest corners of our society,” said Dmitri Kanovich, Looking at the Stars Founder and CEO.

About Looking at the Stars

Looking at the Stars (www.lookingatthestars.org) is based in Toronto, and its main purpose is to deliver classical music recitals performed by world-renowned artists as gifts to institutions and organizations whose members may not have an opportunity to experience live classical music in a traditional setting, or those without access to traditional venues.

Since their start in 2015, they have delivered more than 40 musical gifts to long-term care facilities, hospitals and correctional institutions in Ontario, Quebec, British Columbia and, most recently, in a pilot program in the European Union.