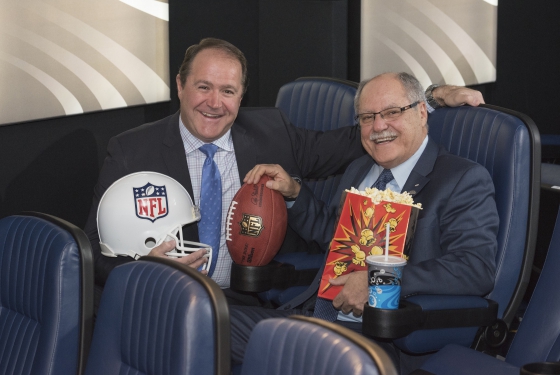 Cineplex, one of Canada’s leading entertainment and media companies, and the National Football League (NFL) today announced a three-year sponsorship agreement that will bring Sunday Night Football and the Super Bowl live to Cineplextheatres across Canada.  In addition to the cinema broadcast, the agreement will also include access to NFL brands and trademarks, as well as event, sponsorship and marketing opportunities for Cineplexand its businesses, including WorldGaming, The Rec Room and Cineplex Store.

Premiering in-theatre as ‘NFL Sundays at Cineplex’ on November 12, 2017, NFL games will be broadcast live to 15 theatres across Canada initially and will expand to 50 locations for Super Bowl LII.  Tickets to ‘NFL Sundays at Cineplex’ will be $5.00 and fans can look forward to enjoying the game in a larger-than-life setting, live on the big screen.

For seven games leading up to the Super Bowl on February 4, 2018, screenings will be hosted at Cineplex’s luxurious, adults-only VIP Cinemas, where football fans can cheer on their favourite team from ultra-wide, luxury recliners.  They will also enjoy in-seat food and beverage service from an expanded menu, which includes a wide selection of beer, wine and spirits as well as classic game-day favourites likes burgers, boneless wings and tacos….and of course, Cineplex’s famous popcorn.

“This agreement is a real touchdown for Cineplex and the over 11 million NFL fans across Canada,” said Ellis Jacob, President and Chief Executive Officer, Cineplex. “We are always looking for new and innovative ways to entertain Canadians and these events will drive incremental attendance to our theatres and provide fans with a viewing experience on the big screen.”

“We’re investing in the Canadian market and this sponsorship with Cineplex, which is a break-through relationship for the NFL in Canada, is part of our strategy to recruit the next generation of NFL fans by offering them unique, engaging and dynamic experiences,” said David Thomson, Managing Director, NFL Canada.  “In addition to offering fans a unique viewing experience, this sponsorship will help us foster a passionate community of fans both through the theatre network as well as online through its eSports platform, WorldGaming.”

As part of the partnership, WorldGaming, Cineplex’s eSports division, will execute a series of online and offline Madden competitive tournaments for NFL fans across Canada.  In fact, the companies have already partnered to launch their first official national gaming tournament – the Madden NFL 18Canadian Challenge sponsored by Xbox.  With thousands of gamers from across Canada already having competed head-to-head in online and playoff qualifiers, the final eight competitors are getting an all-expense paid trip to Toronto to battle-it-out for $20,000 in cash plus prizes at the Live Championships.  The event is being hosted as part of Sunday Night Football festivities at The Rec Room’s Roundhouse location on November 5, 2017, but can also be viewed by fans around the world at Twitch.TV/WorldGaming.

Interested in catching the game at a Cineplex VIP Cinema?  Seats to ‘NFL Sundays at Cineplex’ games can be reserved in advance and will be available on a first come, first serve basis to fans over the local drinking age.  Tickets will be $5.00 and will be available on Cineplex.com, on the Cineplex App or at the box office for game broadcasts on November 12, November 19, December 3, December 17 and the Playoffs in January 2018.

Cineplex will announce event details and location information for the 50 theatres screening Super Bowl LII at a later date.  The following VIP Cinemas will host ‘NFL Sundays at Cineplex’ games leading up to the Super Bowl: