FAN EXPO Goes Back to School with a Degrassi: The Next Generation Cast Reunion 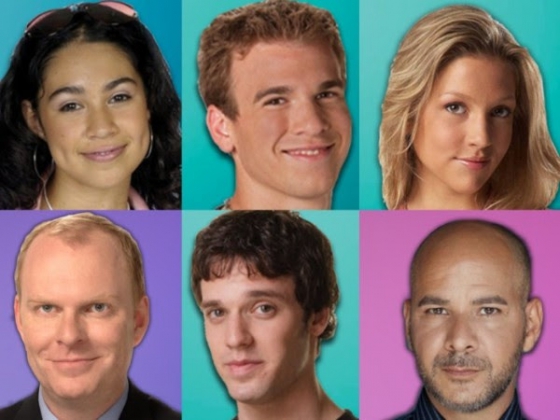 This year's programming lineup also includes an evening with the cast of Back to the Future, a WWE® Night, a Master of Cosplay Grand Prix, a Maid Café and an incredible shopping experience

TORONTO, ON (August 14, 2018) - Don’t be late for class! This year’s FAN EXPO Canadaprogramming lineup will include a cast reunion of Degrassi: The Next Generation just in time for back to school. Cast members Cassie Steele, Jake Epstein, Miriam McDonald, Stefan Brogen,Shane Kippel and Pat Mastroianni will reunite for the first time since the release of Drake’s nostalgic “I’m Upset” music video, which has now been viewed over 69 million times. Fans will have a chance to relive all of their favourite Degrassi memories with the cast when they appear at the show on Thursday, August 30 and Friday August 31 to pose for photos, sign autographs and take part in a live panel.

“The Degrassi High reunion with the original cast was one of the highlights at last year’s Toronto Comicon, and we are thrilled to continue to celebrate this ground-breaking show with the beloved cast of The Next Generation at FAN EXPO Canada,” said Andrew Moyes, Vice President, FAN EXPO HQ. “This year’s lineup also includes many special and unique offerings fans can enjoy, such as a WWE® Night, a Master of Cosplay Grand Prix competition and a Back to the Futurepanel, as well as an incredible shopping experience that our guests return to year after year.”

Here is a preview of some of the programming highlights FAN EXPO Canada fans can to look forward to:

WWE® Superstars Triple H ®, A.J. Styles ™, The Miz ®and Charlotte Flair ™ are stepping into the FAN EXPO Canada ring for the first time in show history for “WWE® Night”. During a special one day only event on Thursday, August 30, WWE® fans will have a chance to meet their favourite faces and heels for an evening of autograph signings and photo ops.

AN EVENING WITH THE CAST OF BACK TO THE FUTURE

Back To The Future fans should ready the flux capacitor because this is about to get heavy. Celebrate Back to the Future at FAN EXPO Canada with Christopher Lloyd, Lea Thompson, Tom Wilson, and superstar Michael J. Fox. A selection of once in a lifetime packages are available as part of this rare Back To The Future cast reunion. Choose from special presentations, autograph signings, photo ops or all the above.

Cosplay is mandatory at this dance party, which features top DJs spinning party music all night. This event is hosted by cosplayers Jessica Nigri, Vamp, Soni Aralynn, Karli Woods, Brit Bliss and more and takes place at Remix Lounge on Saturday, September 1 at 9pm.  Costume prizes will be awarded and tickets are $25 in advance. This is a 19+ event.

Experience FAN EXPO Canada’s most kawaii event! Maid cafés (メイド喫茶 ) are a subcategory of cosplay restaurants found predominantly in Japan featuring waitresses dressed in maid uniforms on hand to “welcome you home” to their world of bright colors, fun games, and all ages entertainment. Each ticket includes table service (a small snack and coffee/tea) from Maid Café Mikkusu, a stage performance from Toronto’s own ACT102, and a finale performance direct from Tokyo featuring maids from Japan’s #1 maid café: Maidreamin! There are two seatings available: Saturday September 1 at 1:30pm and 3:30pm.

Direct from Tokyo to Toronto! Come see the top three maids for Japan’s #1 maid café, Maidreamin, perform live on stage at Uncle Tetsu’s Angel Café. They’ll be joined by local Jpop troupe ACT102 for this rare and special performance for fans of kawaii culture in Ontario. This is an all ages event – and seating is limited, so get your ticket in advance! This event is happening for two nights only on Thursday August 30 and Friday August 31, 2018.

ENCHANTMENT UNDER THE SEA

Experience a Back to the Future themed party with décor and music inspired by the film, and come dressed in a 1950s era costume to win great prizes! The event takes place at Remix Lounge at 9pm on Friday, August 31. Tickets are $25 in advance. This is a 19+ event.

FAN EXPO Canada is proud to host the 2018 Catan Canadian National Championship. The grand prize is a trip to Germany to participate in the 2019 Catan World Championship. Register for theFriday or Saturday qualifier and the top 16 players will participate in a semi-final on Sunday, September 2 to determine the final table of four. The Catan Tournament has an entry fee of $20 for each qualifier.

You are a Time Lord, up against the clock to solve all the puzzles before time runs out! This live adventure game will keep you guessing using various clues, hints and suggestions to complete the all objectives and unveil the secret plot hidden within. A great experience for Doctor Who fans and escape room enthusiasts alike! This event is in support of SickKids Foundation.

Play one of two custom-made escape room scenarios inspired by the world of J.K. Rowling. Try to escape from a vault in the Wizarding Bank or pass a very mixed up NEWT exam for potions! This event has a $15 registration fee.

THE 50th ANNIVERSARY OF 2001: A SPACE ODYSSEY WITH STARS KEIR DULLEA & GARY LOCKWOOD

Join the stars who portrayed Frank Poole and Dave Bowman in Stanley Kubrick's science fiction masterpiece, 2001: A Space Odyssey (1968). Hear behind the scene stories of the making of the movie and more.

Join us and the cast of Star Trek: Discovery, Sonequa Martin-Green, Jason Isaacs, Doug Jones, Anthony Rapp, Mary Wiseman and Shazad Latif, as they discuss the latest on the series. This event takes place on Saturday, September 2 at 3pm.

Back by popular demand, speed dating is returning to FAN EXPO Canada. Come and join in the fun and experience the thrill of meeting your potential soulmate, future spouse or maybe someone a little more casual. On-site sign up only. This is a 19+ event.

Indie meets pro in this special area where fans will find all of their favourite pencillers, inkers and writers. A "must experience area" for anyone interested in meeting rising stars who work the front lines of the industry! From comics, graphic novels, limited edition prints and best of all, original art and sketches!

Fans can experience the hottest new products and services before anyone else sees them! Companies from all corners of the industry will be showcasing their upcoming projects and promos in the exhibitor area and fans get to be there for a sneak peek. Exhibitors include Hasbro, Funko, EB Games, Disney Canada, Blizzard Entertainemnt, WB Games, Xbox, PlayStation and so much more.

Over 900 retailers from all over join FAN EXPO Canada to make the experience an unforgettable one! Specializing in everything comics, anime, gaming, science fiction and horror, these retailers have what every fan needs. Whether it’s a comic books from any era, original artwork, graphic novels, memorabilia, DVDs, videos, games, toys or t-shirts – fans can find it all here.

For a complete list of programming, guests, info and tickets, visit: www.fanexpocanada.com.