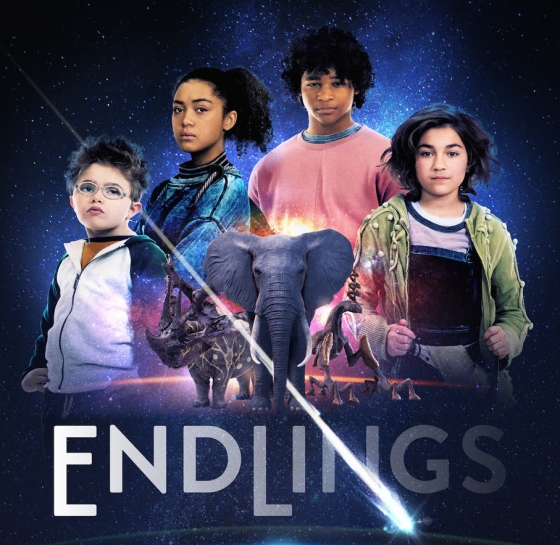 Endling [end•ling]
noun
An individual living thing that is the last survivor of its species or subspecies and whose death consequently means the extinction of that species.

Endlings, produced by Sinking Ship Entertainment in partnership with Hulu and CBC, is a sci-fi action adventure series for kids and families. All 12 episodes will be premiering on Hulu on January 17. Set 20 years in the future, Endlings is the empowering story of four teenagers in foster care who discover they're not alone in the universe, even though sometimes it can feel like they are. Halfway across the world, Tuko becomes the last elephant in existence - an endling. Her endling status summons to Earth a mysterious Alien who is on an intergalactic quest to save the last member of near-extinct species.

After Tuko is collected, the Alien's ship malfunctions and sends it on a crash course with the farm where Julia (Kamaia Fairburn), Johnny (Edison Grant), Tabby (Michela Luci) and Finn (Cale Thomas Ferrin) live with their foster dad, Mr. Leopold (Neil Crone). Before crashing, the Alien releases all of its cosmic collection into the fields and wilderness surrounding the property. This kicks off a high-action life-altering mission to retrieve these fantastical creatures before the local police, Tuko's caretaker (Oyin Oladejo), or a secretive industrialist (Lisa Ryder) can. Along the way, four discarded teens discover that "endling" doesn't have to mean the end; it can also mean a new beginning.