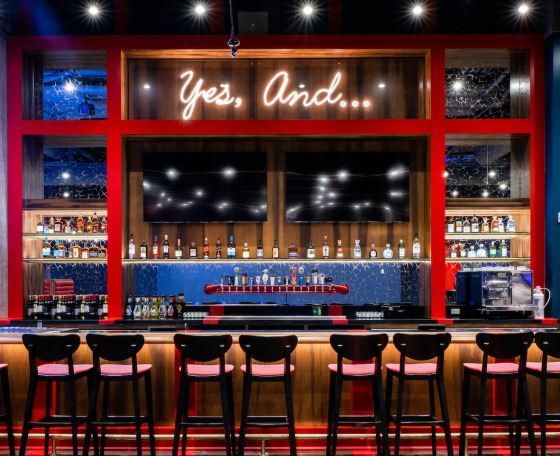 TORONTO - The Second City is thrilled to announce that its new home at One York Street will officially open November 30, 2022, with the first public performances to begin December 1. The new flagship home will be The Second City's largest, most state-of- the-art venue since the world class comedy company first opened its doors in Canada in 1973. Featuring three theatres, nine Training Centre studios for student classes and partner workshops, and a full service restaurant and bar with food by Canadian hospitality leaders Oliver & Bonacini, the new location is a one stop shop for all things entertainment.

First announced in 2019, construction of the new, instantly iconic Second City location has been a true labour of love. In addition to the Mainstage Theatre, with a seating capacity of 244, and Theatre ’73, seating 170, the John Candy Box Theatre will feature a portion of the original stage from The Second City’s home circa 1974, The Old Firehall which held legends such as John Candy, Eugene Levy, Martin Short, Catherine O’Hara, Gilda Radner, Colin Mochrie and Mike Myers.

“Comedy is coming home to Toronto! It is fitting that The Second City Toronto celebrates its upcoming 50th anniversary in 2023 with a brand-new, custom built entertainment and educational complex. We are ecstatic to share this amazing new space and a new show featuring our award-nominated cast with our audiences, students, talent, and community,” said The Second City Creative Director, Carly Heffernan.

The new 28,700-square-foot space is located on the third floor of One York, a 35-floor mixed-use Class AAA building located at York and Harbour in Toronto’s vibrant South Core Business District. Built in 2016, One York offers direct PATH access to TTC, GO Transit, VIA Rail, and the Union-Pearson Express as well as close proximity to some of the city's landmark entertainment venues, such as Scotiabank Arena, the Rogers Centre, Ripley's Aquarium of Canada and the CN Tower. Tickets to shows at the One York Street location are now on sale at secondcity.com.

About The Second City
The Second City opened its doors in Chicago in 1959 as a small comedy cabaret and has since grown to become the world’s most influential name in improvisation and comedy. It celebrated its 62nd year in business on December 16th, 2021. The Second City's stages, Touring Companies, and Training Centers across North America have proudly been the launch pad and artistic home for many of the funniest performers, writers, directors, and comedic minds on the planet.