The Word on the Street Reunites Book Lovers with Celebrated Canadian & Indigenous Authors and Introduces WOTS+, A New Day of Programming 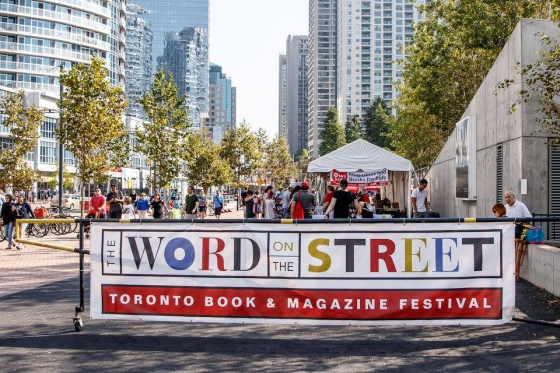 Toronto, August 9, 2018 - The Word On The Street, Canada’s largest free outdoor book and magazine festival, is set to welcome a stellar lineup of authors and poets for bibliophiles of all ages. Now in its 29th year, the festival celebrates Canadian literature and literacy by showcasing some of the country's top authors and offers a variety of author and industry panels, book signings, workshops, and a book and magazine marketplace featuring 200+ vendors. This year’s festival will feature more than 180 guests across genre and discussion topics such as children’s books, romance, crime, speculative fiction, memoirs, social issues, and more. The Word On The Street takes place on Sunday, September 23, 2018 from 10 a.m. to 5 p.m. at Harbourfront Centre, unless otherwise stated. Visit the festival’s website for more information.

New this year, the Festival will introduce WOTS Plus+—a new day of programming—onSaturday, September 22. Free to the public, WOTS Plus+ features three new programming streams: On Civil Society, presented by the Toronto Public Library, explores critical issues including democracy, media, and urbanism; Conversations+ features discussions between distinguished authors on topics such as dystopia, community, and Indigenous literatures; andHeadlines+ dives into current events and issues affecting Toronto and the GTA. In addition, the festival will partner with Grownups Read Things They Wrote as Kids for a live podcast event onMonday, September 17 at The Royal Cinema. Tickets will be available atgrownupsreadthingstheywroteaskids.com for $16.95 starting Monday, August 13.

“Stories are important. Now more than ever. Our 2018 authors bring insight and empathy to stories that grapple with the past and create space for resilience and belonging today," said The Word On The Street Festival Director David Alexander. “In my first year as Festival Director, I have had the privilege to work with a phenomenal team to present an exciting lineup of writers across a range of genres to passionate readers from Toronto and beyond. I’m especially excited for WOTS Plus+, our new day of programming featuring provocative conversations with journalists, authors, academics, and activists. We're engaging as many voices as we can, to explore what Canadian and Indigenous stories mean today.”

The ever-popular Amazon.ca Bestsellers will return with some of the biggest names in Canadian literature including Linwood Barclay (A Noise Downstairs), Amy Stuart (Still Water), Najwa Zebian (Mind Platter), Hana Shafi (It Begins With The Body), Wayne Grady (Up From Freedom), Elisabeth de Mariaffi (Hysteria), Kenneth Oppel & Sydney Smith (Inkling), Joel Thomas Hynes (We'll All Be Burnt In Our Beds Some Night), and Michael Kaan (The Water Beetles). In addition, Karl Subban, father of NHL players P.K., Malcolm and Jordan Subban will make his festival debut on the Amazon.ca Bestsellers stage along with co-author Scott Colby (How We Did It).

Audible Presents Great Books will feature the most dynamic books of the year from across the country including appearances by authors Joanna Goodman (The Home for Unwanted Girls) and Anne T. Donahue, (Nobody Cares). The Vibrant Voices of Ontario Tent will spotlight Ontario authors including The Globe and Mail’s Elizabeth Renzetti (Shrewed: A Wry and Closely Observed Look at the Lives of Women and Girls) and Anishinaabe and Métis poet Gwen Benaway (Holy Wild). The Vibrant Voices of Ontario tent will also host the 10th edition of the Toronto Poetry Slam Competition. Booklovers can board the Author Cruises for captivating readings and discussions on the high seas with guests including New York Times bestseller Kelley Armstrong (This Fallen Prey) and acclaimed crime novelist Ian Hamilton (The Imam of Tawi-Tawi). The Author Cruises are ticketed events ($20 for adults and $10 for children). Tickets will be on sale here starting Monday, August 13.

The Word On The Street is pleased to present the Indigenous Voices Stage as well as the La scène Viamonde Francophone to new and returning audiences. The Indigenous Voices Stage will host storytellers such as writer Waubgeshig Rice (Moon of the Crusted Snow) and Griffin Poetry Prize winner Billy-Ray Belcourt (This Wound is a World). La scène Viamonde Francophone will showcase French literature with special guests including children’s author Mireille Messier (Tellement Sauvage) and fiction writer Didier LeClair (Le bonheur est un parfum sans nom). This stage will also offer French language activities that the whole family can enjoy.

As in past years, the Festival invites families to participate in fun and interactive programs with some of Canada’s distinguished children’s authors. TD KidStreet will celebrate Canada’s vibrant children’s publishing industry with readings and activities for kids and parents. TD KidStreet will feature the TD Children's Literature Tent and the Kids Activity Tent. The Teen Spirit Stage will host the Inspire Teen Reads competition where teens pitch their book ideas to a panel of authors and publishing professionals. In addition, Sculpting New Reads, in partnership with Labspace Studios, will return for its fifth year, where four contemporary artists have been paired with books released in 2018.

The Toronto Star Tent will feature thought-provoking discussions with some of its most popular reporters on Ontario’s new government, US-Canada trade-wars, and #MeToo. Canadian Magazines programming will present panel discussions and presentations from contributors to some of the country’s liveliest periodicals, with a special 2018 focus on careers in Canadian magazines.

Click here for the full list of programs, participating authors and panelists. More programming details will be announced in the coming weeks. The Word On The Street full programming schedule will be released throughout the month of August.

The Word On The Street is grateful for the financial support of the following: The Government of Canada, The Government of Ontario, the Ontario Cultural Attractions Fund, The City of Toronto, the Toronto Arts Council, The Ontario Arts Council, The Canada Council for the Arts, The Toronto Public Library (On Civil Society), Amazon.ca (Amazon.ca Bestsellers), Audible (Great Books), TD Bank (TD KidStreet), Conseil scolaire Viamonde (La scène Viamonde Francophone), the Toronto Star (Toronto Star Tent), Open Book and the Toronto International Festival of Authors.