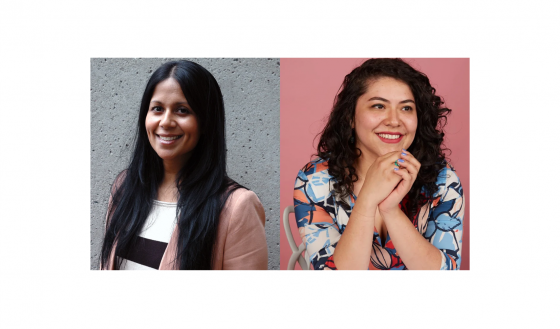 The WarnerMedia Access Canada team (formerly Global Access Programs-Canada) was formed in September 2020. It is laser-focused on connecting experienced, mid- and entry-level talent from underrepresented communities with global opportunities in above- and below-the-line roles. The team has already launched its inaugural talent activation with the WarnerMedia Access X Canadian Academy Writers Program, designed to champion experienced mid-level Canadian writers, provide them with access to WarnerMedia executives and creatives, and accelerate their advancement into decision-making roles. Finalists for the program will be announced in June.

With the addition of two new members, the WarnerMedia Access Canada team is now in a position to scale its operations.

“We are excited to grow our team, as well as our efforts and output, with the addition of Erika and Luisa. Their roles are highly specific, and they each bring unmatched expertise and industry experience. They also bring a genuine personal commitment to building a vibrant industry where Canadians of all backgrounds are valued and have the unfettered opportunity to achieve success. With our new colleagues, we can double our focus not only on delivering specific programs but also on building a sustainable, long-term talent pipeline between WarnerMedia and the exceptional creatives, artisans and technicians who have long been present but unrecognized in this country,” said Deanna Cadette, Executive Director, WarnerMedia Access Canada.

As Program Manager, Kumar will lead the team’s expansive below-the-line efforts, aimed at addressing systemic barriers and meeting the growing demand for labour and inclusive crews in a rapidly expanding industry. Kumar's portfolio includes Access to Action. This capacity-building program will partner with community groups, unions and guilds, and government agencies to build pathways for industry-trained Canadians to positions on WarnerMedia productions. It is inspired by the success of WarnerMedia’s A2A program south of the border.

Prior to joining WarnerMedia, Kumar was a Business Analyst at Creative BC where she managed direct funding programs, including the Interactive Fund, Domestic and International Industry Initiatives (Sponsorships) and the MPPIA Short Film Award as well as arranging sponsorships with premiere film festivals, organizing international trade missions, negotiating partnerships with broadcasters and federal funding agencies, and developing initiatives that prioritize under-represented groups.

“WarnerMedia has proven their commitment to creating pathways into the industry with their suite of programs. While many of the current initiatives for underrepresented groups in Canada support above-the-line talent development, the Access to Action Program will focus on below-the-line job creation. Bringing about transformative change and meeting the industry’s expanding need for top-quality crews includes diversifying film and television roles. We need to ensure that all Canadians feel represented both in front of and behind the camera and can participate in this growing industry,” said Erika Kumar, Program Manager, WarnerMedia Access Canada.

As Associate Project Manager, Alvarez Restrepo will help drive the design and delivery of the programs’ suite of initiatives, with a special focus on film festivals, games and opportunities at the intersection of creativity and tech. Alvarez Restrepo is a Colombian-Canadian arts administrator, event programmer, and producer, whose last film (FORBIDDEN TIKKA MASALA) won seven awards internationally, was shown across Canada as part of TIFF Film Circuit, and was licensed by the CBC. She joins WarnerMedia from the Toronto International Film Festival (TIFF), where she was Senior Coordinator of Festival Programming. Previously, she has been part of the programming teams at HAAPIFest, and CGood TV where she advocated for diversity in storytelling.

“As a filmmaker and creator myself, I am aware of the barriers underrepresented communities face in this industry, so I’m beyond excited to now be in a position to create pathways for all voices to see themselves represented on screen, while bringing authentic stories to the screen that represent the diversity of Canada and celebrate different types of storytelling,” said Luisa Alvarez Restrepo, Associate Project Manager, WarnerMedia Access Canada.

Established in 2020, WarnerMedia Access Canada elevates, activates and connects Canadian talent from underrepresented communities with global opportunities and global audiences. This suite of above- and below-the-line initiatives builds WarnerMedia relationships with creators, artisans and technicians from communities such as Indigenous, Black and racialized groups, people with disabilities, and members of LGBTQ2+ and Francophone minority communities. WarnerMedia Access values the undervalued and recognizes the underrepresented -- all to bring the best and most promising talent in Canada to the world.

WarnerMedia, and its suite of brands like Warner Bros., CNN, HBO Max, HBO, TNT, TBS, Cartoon Network, Adult Swim, Boomerang and many more, have long been committed to equity and inclusion as moral and business imperatives. It is essential that our content and creative partners reflect the diversity of our society and the world around us. Together with other production companies, networks, guilds, unions, talent agencies and others in the industry, WarnerMedia is committed to greater inclusion of people of color, women, the LGBTQ community, those with disabilities and other underrepresented groups in greater numbers both in front of and behind the camera.