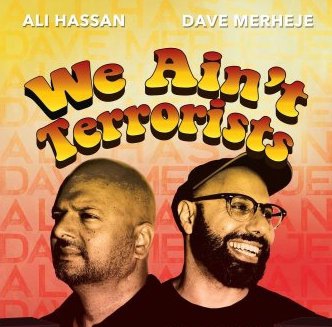 Inspired by real-life experiences, We Ain’t Terrorists is a fresh, truthful, passionate and hilarious collaboration by these two established Canadian entertainers. Hassan (Pakistani-Muslim) and Merheje (Lebanese-Christian) explore the stereotypes, misconceptions, and misunderstandings that they regularly face, inside and outside of their own communities.  We Ain’t Terrorists is also a socially poignant show that strives to counter the tide of prejudice that exists in this country and globally, all while spreading the love, relatability and laughter.

About Ali Hassan
Ali Hassan is a stand-up comic and actor who has performed for audiences across Canada and internationally.  He is a Canadian Comedy Award nominee who has performed at the Just For Laughs Festival in Montreal, Toronto's JFL42, the Winnipeg Comedy Festival, and now tours his solo comedy show Muslim Interrupted around Canada and internationally. Muslim Interrupted sees Ali deliver a personal perspective on Islam and being a Muslim-Canadian by putting a human face on the religion, and countering negative stigmas with humour - something that is especially pertinent in light of recent events around the world and their reverberations.

Fans will recognize Ali as the host of CBC’s Laugh Out Loud, a frequent guest-host of CBC q, the leading arts and culture program in Canada, and the host of Canada Reads. Ali can now be seen in the Netflix film The Holiday Calendar.  His other credits include Designated Survivor on ABC/CTV and FX’s Man Seeking Woman, PBS Kids’ Odd Squad and CTV’s Cardinal.

About Dave Merheje
Dave Merheje is considered to be one of the most original stand-up comedians on the comedy scene today. He has won the Just For Laughs ‘Homegrown Comic Competition’ and NOW Magazine's ‘Best of Toronto Award’ for Best Male Stand-up, and has been nominated for a Canadian Comedy Award for both Best Stand-up and Best Taped Live Performance.  Now based in New York City, Dave has taken his act across the world including to Australia and China.

Dave can currently be seen as a cast member of Mr. D on CBC and just released a live comedy special, Good Friend, Bad Grammar. Previously, Dave was a regular contributor on MTV Live.