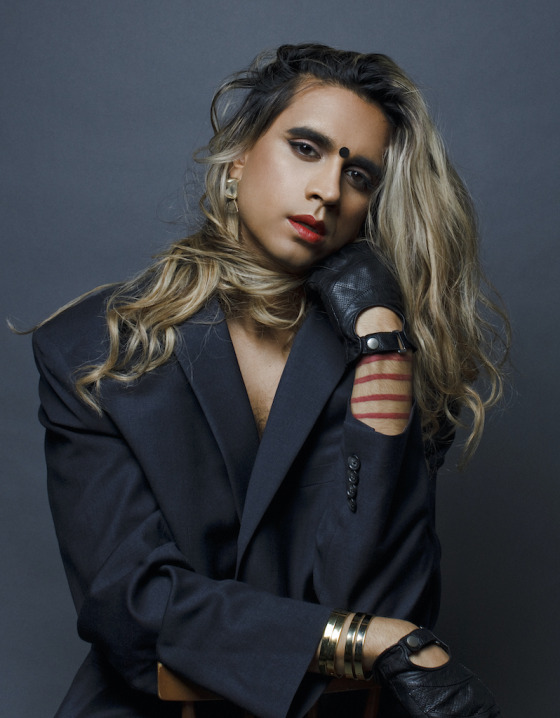 TORONTO, January 23, 2023 – CBC and Sphere Media announced today that production is underway on How to Fail as a Popstar, a CBC Gem original series based on award-winning artist, author, and musician Vivek Shraya’s debut theatrical work of the same name, a one-person performance reflecting on the power of pop culture, dreams, disappointments, and self-determination. The series stars Shraya, Adrian Pavone (Star Trek: Discovery, Grand Army), and Chris D’Silva (Slumberland, The Handmaid’s Tale) as Vivek at various stages of life. Written by Shraya, the comedy series is directed by Vanessa Matsui (Midnight at the Paradise, Ghost BFF) with Shraya co-directing one episode, with filming to continue in Toronto for three weeks. The series will premiere on CBC Gem later in 2023.

How To Fail as a Popstar is a coming-of-age, eight-episode limited series about a queer brown boy with a huge voice doing everything he can to become a Popstar – as told by the queer trans femme that boy becomes, looking back on how and why that dream was never realized.

"I was instantly attracted to Vivek’s distinct voice, and the tightrope that she walks with her words, and I'm honoured that Vivek, Sphere, and the CBC trusted me with this special script. Failure is a theme that resonates deeply with me, and I suspect many of us, so I hope this show encourages us to embrace our failures in the spirit of finding something perhaps more profound than 'success' – ourselves," said Vanessa Matsui, director.

“There is very little space to acknowledge and mourn our failures in a culture that is obsessed with success and resilience. I wrote this story because no matter what I achieved, failing as a popstar – however trivial – was the thing that kept me up at night. I’m so grateful to CBC and Sphere for believing in this project and for helping create more space for the conversations we avoid but very much need,” added Vivek Shraya, creator and writer.

“Vivek is a unique talent whose authentic and honest voice shines through her work, regardless of the medium. We’re thrilled to be working with Sphere Media to bring her powerful and relatable story to life on CBC Gem, where she will no doubt find new followers and delight her current fanbase,” said Zach Feldberg, Director of Current Production, Comedy & Head of Scripted Gem Originals, CBC.

Shraya is an artist whose body of work crosses the boundaries of music, literature, visual art, theatre, and film. Her album Part-Time Woman was nominated for the Polaris Music Prize, her music was featured on the acclaimed CBC and HBO Max show Sort Of, and her best-selling book I’m Afraid of Men was heralded by Vanity Fair as “cultural rocket fuel.” She is also the founder of the award-winning publishing imprint VS. Books, which supports emerging BIPOC writers.

The stage play How to Fail as a Popstar was written and created by Vivek Shraya and directed by Brendan Healy. The original production was commissioned and produced by Canadian Stage, Toronto, Ontario.

How to Fail as a Popstar is produced by Sphere Media with the financial participation of the TELUS Fund, the Bell Fund, and the Shaw Rocket Fund. In June 2020, the project was selected as one of the recipients of development support from the CBC Creative Relief Fund, a fund created by CBC to provide immediate support to Canadian creators at the beginning of the COVID-19 pandemic. Created by Vivek Shraya, executive producers are Bruno Dubé, Jennifer Kawaja, Elise Cousineau, Caroline Habib, Laura Perlmutter, Vivek Shraya, and Vanessa Matsui. For CBC, Sally Catto is General Manager, Entertainment, Factual and Sports, Trish Williams is Executive Director, Scripted Content and Zach Feldberg is Director of Current Production, Comedy and Head of Scripted Gem Originals.